The euphoria of a highly-competitive FFPL final still makes us giddy as we go about our day, but the news of the next flagship tournament - FFIC 2022 Spring on the horizon makes us even more excited. We are very happy to announce that this tournament will boast a prize pool of 1 crore rupees, the biggest that India has seen so far!

The registrations will be live from 7th to 11th February 2022. Once you have successfully registered, you can start your FFIC journey. You can get more information about how to register here.

Ten tickets will be issued to every participant via the FFC (Free Fire Cup) mode in-game. Perform to the best of your abilities. The scores of the best five matches that you play will be taken into consideration while calculating your final score. 42 teams with the highest scores in the region will be invited to play in the next stage of the tournament - The closed qualifiers.

The rising underdogs from the FFC mode qualifier will arrive here, to take a shot at greatness. But glory is not easily achieved, for it will shoot back at you. These underdogs will have to prove that they can be the big fish, in a pond full of killer sharks. They’ll be up against some of the aces from the existing competitive circuit who are fighting to keep their signature elite status.

The bottom 6 teams from FFPL 2022 Winter finals will have to fight it out in the Closed Qualifiers to retain their spot in this season of FFIC 2022 Spring. 42 teams from the FFC Open Qualifier and 6 teams from FFPL make up for 48 contenders. They’ll be divided into groups and will play from 16th to 20th February 2022. Only the top 12 teams will make it to the league stage. 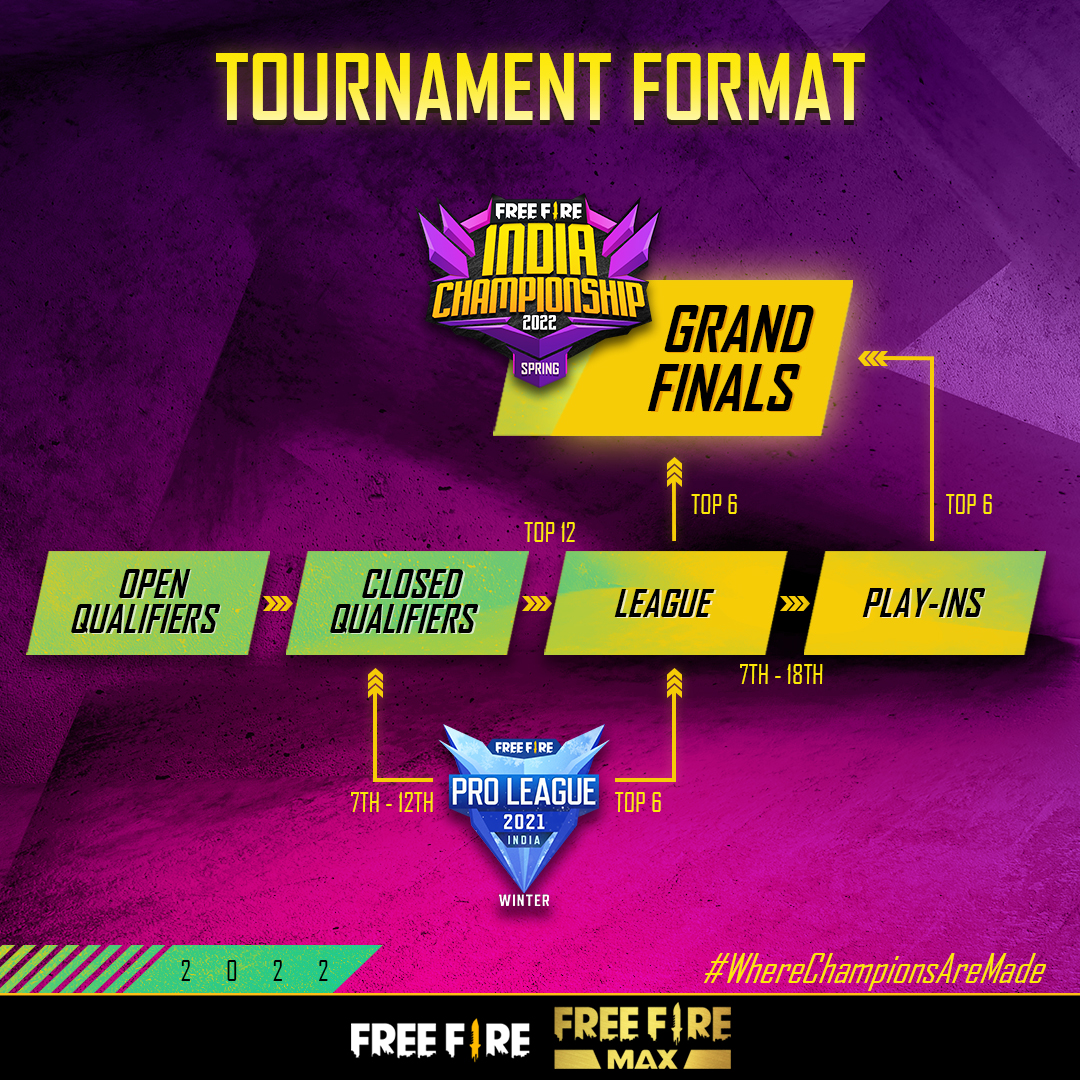 While the bottom 6 teams from FFPL 2022 Winter fight the underdogs in the closed qualifier, the top 6 teams from FFPL will be directly invited to the League stage of FFIC 2022 Spring. They’ll be pitted against the top 12 teams emerging from the closed qualifier. These 18 teams will engage in war from 11th to 27th March 2022 over a period of 9 days.

These teams will be broken down into three groups of six teams each. They’ll have to perform well on all of these days, because their regular points will be converted into league points at the end of each play day, and based on that, they’ll be ranked in their respective groups.

The top 2 teams from each group, i.e. six teams from the league stage will qualify directly for the Grand Finals. The others will have one last chance to get in the finals - through the dreaded Play-ins.

3rd April 2022 marks the date of the Play-Ins. Just one day, six matches in between these hopeful contestants and a guaranteed pay-out. All they have to do is finish in the upper half of the lobby at the end of these six matches. It’s no longer about consistency, it’s truly about survival and primal instincts there. If they succeed here, they’ll make it to the finals.

The Free Fire India Championship 2022 Spring grand finals will take place on 10th April 2022. These kings are competing for a prize pool of 1 crore. But money is not the only motivation!

The winner and the runner-up of FFIC 2022 Spring gets to represent their country at the international level. The winner will qualify directly for the final of Free Fire World Series 2022 Sentosa, which will take place in May 2022, while the runner-up team qualifies for the Play-Ins of the FFWS. 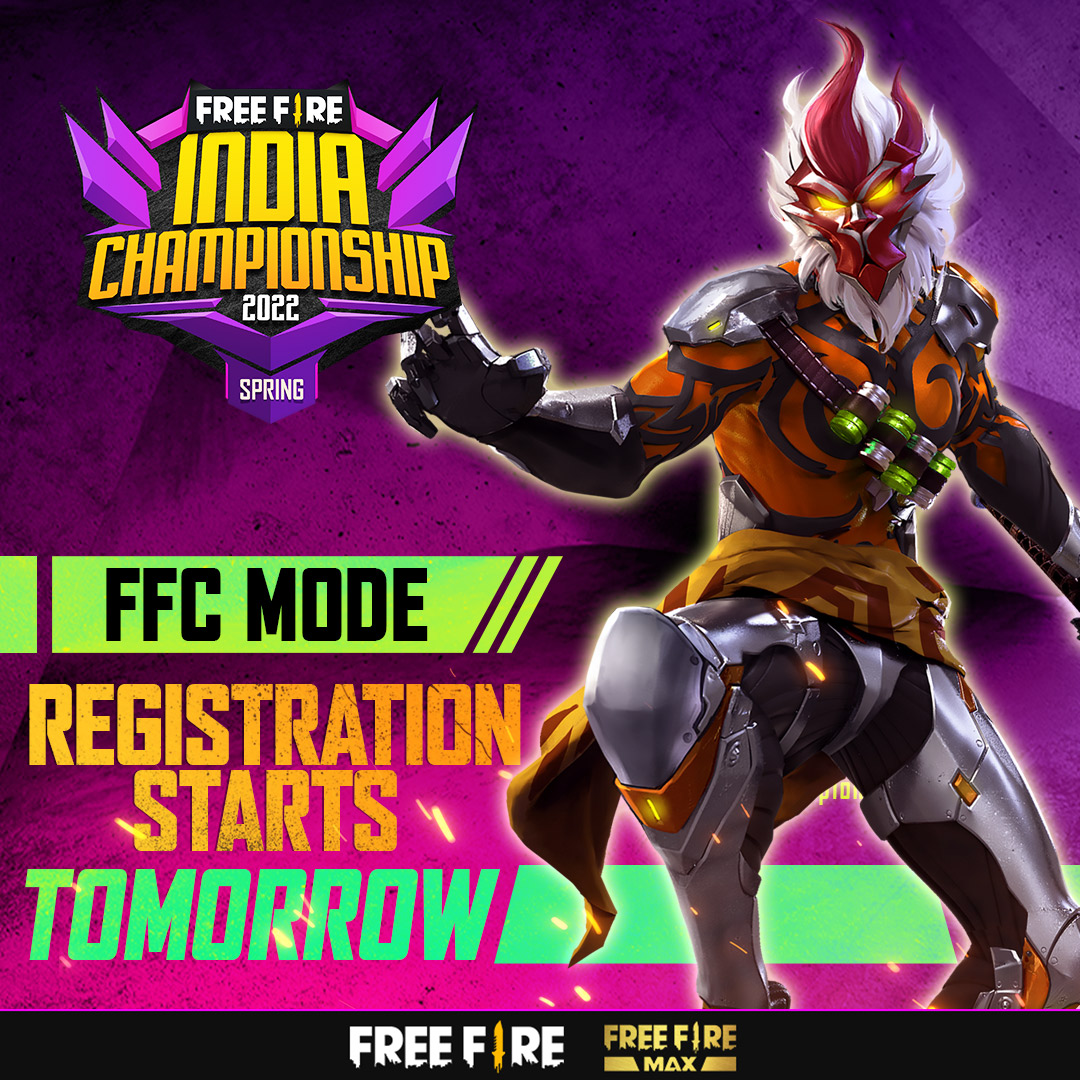 This tournament could be your path to greatness. Go get ready with your squad, registrations opens on 7th February! Check out the FFC Tutorial video here to get more information regarding registerations.