The war for the title of the best esports team in India has been raging for three days now. The first week of Free Fire India Championship 2021 Fall is over, and we are still coming down from the high of this adrenaline-pumping tournament. At this point, we must felicitate some of the players who got our hearts racing in this championship so far. In this article, we will talk about the top 5 players of the tournament in week 1 and discuss what they did to get there.

Narai Yadav started his journey in the competitive circuit when Total Gaming Esports signed him earlier this year. He’s only a few months in, and he’s already giving the veterans a run for their money. One wouldn’t say he is a rookie if they see how much he has grown over the last few months. His growth is astounding. His efforts have kept Total Gaming Esports on the top of their group standings. The team got 21 kills on the first day and 31 on the third day, making them one of the only teams that hit a half-century. Out of these 51 kills, 26 came from Delete, which means he got nearly half the frags for his team. This performance also enabled them to win 4 booyahs. They got 2 booyahs on the first day and 2 more on the third. While his performance on Day 1 was impressive, he blew our minds away on Day 3. Needless to say, he blew up his enemies too in a brutal fashion. His nading skills were on point, tossing perfectly cooked hand grenades to blow his opponents to smithereens. He became even deadlier when he got the M79 Grenade Launcher in his hands. This is one pyromaniac that their enemies would want to take out quickly if they want to ensure their survival.

Radhetkr trails behind Delete by two points, having 24 kills to his name. While his performance on the second day was great, he went on a rampage on Day 3. His team 4 Unknown had the highest single-day frags that time. Getting 30 kills on a single day is no joke. While this team only has one booyah to their name, as long as they keep on racking up their kill point, they will continue to be on top. 4 Unknown surely started popping off towards the end of this week, but it remains to be seen whether or not they will be able to keep up their consistency. If Radhetkr is set up for success by his teammates, and their coordination is on point, 4 Unknown will be unstoppable. 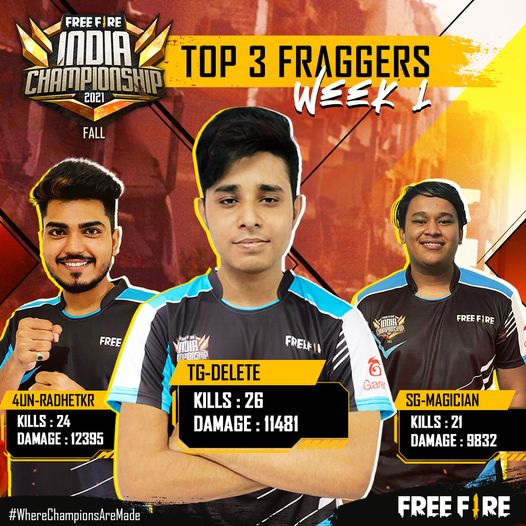 Skylightz Gaming is a relatively new team to this competitive circuit. Hailing from Nepal, they are doing a phenomenal job of proving why this snowy country can produce some of the finest Free Fire talents. Magician had 21 kills this week, while his team had a total of 43. Skylightz Gaming have shown a variety of cool new strategies so far, and one of these strategies even got them the booyah on their second day in the tournament. However, because they have so many options and strategies that they can choose from, they haven’t found their optimal fit yet. It’s about time that this team re-internalizes everything that they have learnt and found out from this week’s play and adjusts their form in the week to come. Once the chinks in their armor have been repaired, Magician can once again mesmerize us.

One would usually see Team Elite with more than one member in the list of top 5 players. Unfortunately, this time there is only Pahadi. This isn’t a surprise by any stretch of the imagination. Pahadi has always been the grim reaper of the lobby, and one can always find him lurking around on the top of the kill leaderboard. This week Pahadi turned 20 players into crates. While this number may seem lacklustre compared to some of the digits we have seen before, one must not forget that his teammates share just as much potential for destruction. The entire team puts in a collective effort to pierce as many skulls as possible. As a result, they are the team with the highest kills this week. They got 31 kills on the second day and 28 on the third day. Pahadi’s double sniper setup still continues to be deadly. The new marksman AC80 suits Pahadi well. He was able to pull off a 1 vs 3 clutch too and almost won the game for his team. But he certainly was the hero in that moment.

Galaxy Racers have the highest placement points in the tournament. They are the team right now with the most stable and sustainable strategy. Their passive approach to the game, and their ability to isolate enemies and move from compound to compound is second to none. Their game sense is on a next level all together. However, even a team that is best known for picking up the safest spots, they do have to fight eventually. For all their other needs regarding firepower, they have Tahire. 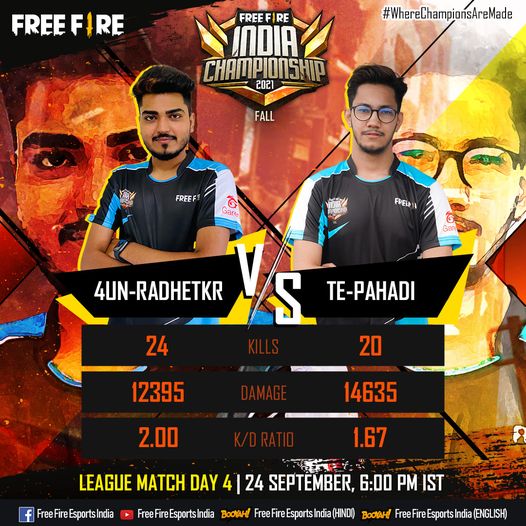 These were the top 5 players of week 1 and you should keep an eye out on them in week 2 of the FFIC 2021 Fall as well. Make sure to tune in to Free Fire India Championship League Matchday 4 on 24th September at 6 PM IST on our Free Fire Esports India Youtube channel.