Free Fire India Championship 2021 Fall is a very topsy turvy journey. The second day of the tournament brought with it a lot of surprises, plenty of leaderboard shifts and a scythe-themed party. Just yesterday, we were under the assumption that the underdogs would perform considerably well. However, Groups B and C were playing today. Group C has been termed by many as the “group of death”. And rightly so. No underdog was able to handle the heat today, as the good old veterans of the scene showed everyone who the bosses are.

Team Elite has done enough to prove that they are one of the best teams in India. They have a habit of performing really well during the League Stage of several tournaments, but not during the finals. This year too, the trend has seen a predictable start, atleast for now. Team Elite won the very first game that they played. Because of that early boost, Team Elite ended the day in the top 3 of the leaderboards. Let’s see if they are able to finish the finals of the tournament in such a dominant fashion too.

Galaxy Racers topped the leaderboard with their consistency

Whether the battle is in the plains of Purgatory or the corners of Kalahari; whether they are edge-locked or camping the centre, Galaxy Racer always finds a way to keep themselves alive for as long as possible. They also extract great value out of each second that they keep breathing, always looking for ways to cause more damage and snag opportune frags. They had amazing performances in every game, always netting more than 10 kills every match. After several close matches, they were able to finally snag a booyah too in the fourth game in Bermuda. It was a humble win with only six kills, but it was a very smart one. Galaxy Racer gatecrashed Clock Tower somewhere during the second ring and held a compound there with an iron grip. They kept their heads down and kept threats at bay. They finally rose up when the number of opponents had thinned out and guarded the broad stairs. They also chopped up members of Team Elite in the end with their scythes to get some style points.

Scythes be swinging, heads be flying

For a second yesterday, it seemed like the meta has changed and the most powerful weapon on the battlefield wasn’t the grenade launcher, but the scythe. We witnessed multiple instances across all the games where players pulled out their blades in close quarters combat. Advanced movement techniques and bunny hopping turned players into hard-to-aim-at targets, which allowed the scythe wielders to get within striking distance. These plays were particularly effective against shotguns. Galaxy Racers did it in Bermuda to win the game. Skylight Gaming got a taste of it in Kalahari, courtesy of From The Future. TSM didn’t shy away from it either, and swung it out in Purgatory. 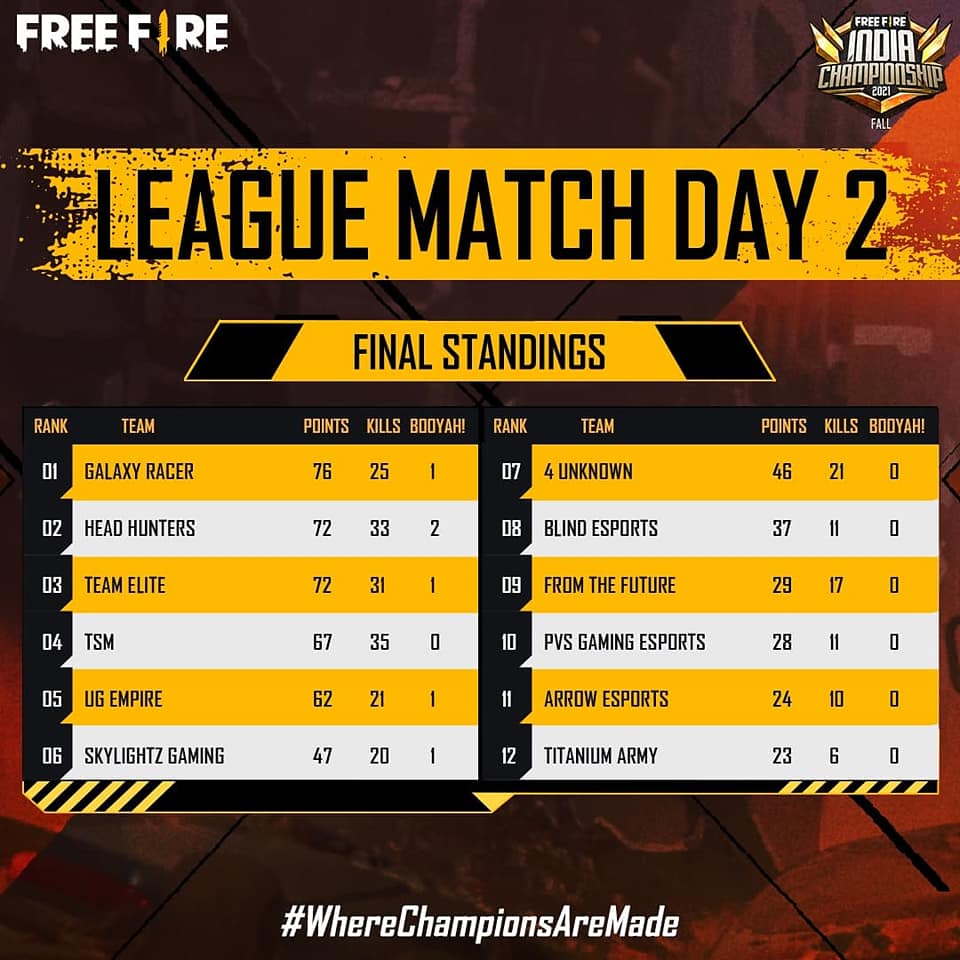 In Matches 2 and 5, Head Hunters proved their supremacy. They had a great amount of control over the zone and were able to stop opponent teams from moving to their desired locations. They were able to shut down many rotations and get a huge bounty of frags in the process. This was a rather clean booyah that one takes on the back of some freshly shifted circle momentum. In fact, in the game on Kalahari, we thought Head Hunters had no chance of winning because they were trapped in between two big names - Galaxy Racers and Blind esports. Despite overwhelming odds, they were able to get out of troublesome positions and avoided getting corners. Their mid-to-long range gunfights behind gloo fortresses gave them quite a bit of advantage. They won the match on Kalahari and surprised everyone.

UG Empire and Skylightz Gaming claim a booyah each

Both these teams won a game each to stay ahead of the curve in the middle order. They finished the day at positions 5th and 6th respectively. They also stand at 3rd and 4th positions in their groups according to the League Standings. These teams might not have had the most consistent performances yesterday, but they did not let go of any opportunity if it knocked on their door. 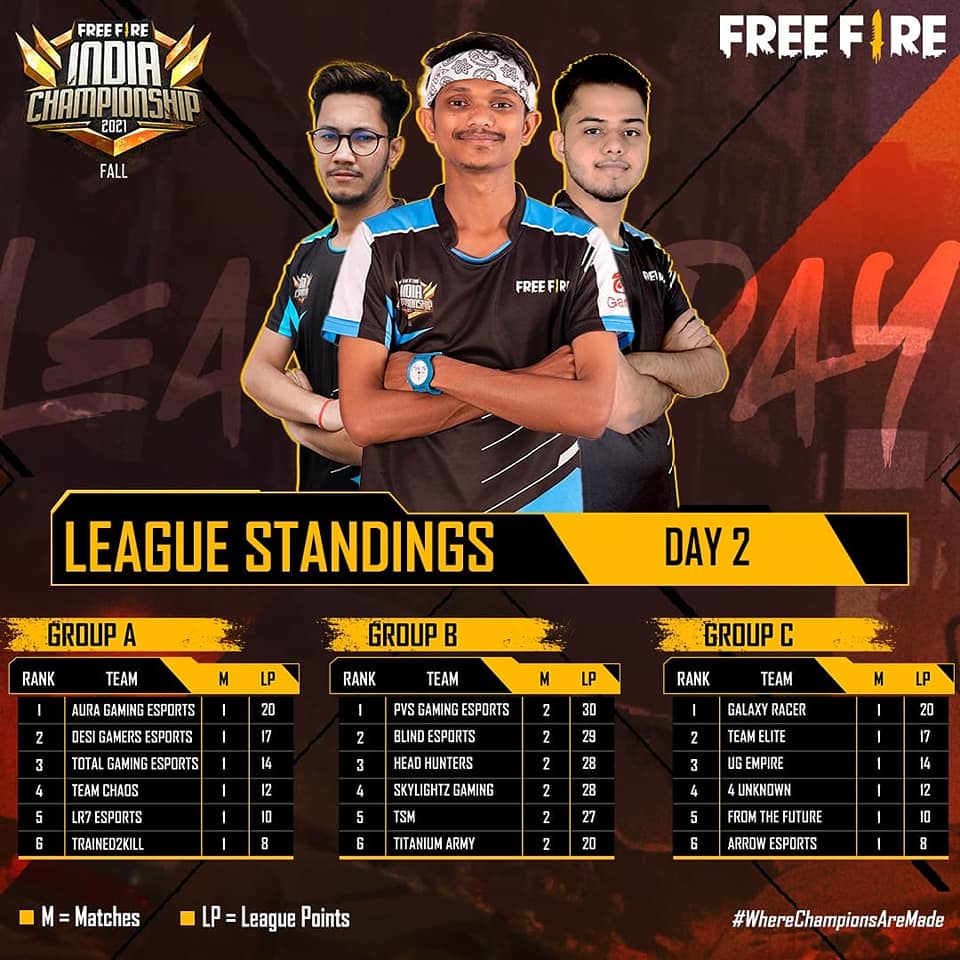 TSM did not have a lot of high-placement games yesterday, which is where they lacked a bit. They are sitting at the 5th position on the overall standings because of fragging power. They were the team with the highest number of kills yesterday(35). TSM - OldMonk was the kill leader of the day with 15 kills. TSM - MrJay was also present as the fourth highest fragger, and he had 11 kills.

We got to see some mindblowing plays yesterday, which felt out of this world. This is just the start though. We have several great experiences for you in the Free Fire India Championship 2021 Fall. Make sure you tune in today for League Matchday 3 on our Free Fire Esports India Youtube channel at 6 PM IST.