History has a funny way of teaching us about what can happen in the future. One can either learn from it, or watch history repeat itself. FFIC 2021 Fall is about to start soon, and judging by whatever we have seen in competitive Free Fire so far, here’s what you can expect from the new season.

Nobody expected Galaxy Racer to win FFIC 2021 Spring, but they did. This was a tournament where Total Gaming finished dead last. Yet, somehow they were able to prove to everyone that they still have what it takes to win by conquering the Free Fire Pro League. Both these unlikely contenders have always been doubted ever since they split, but this championship would finally settle it all.

Total Gaming and Galaxy Racer will always be a rivalry for the ages, but one cannot forget the wrath of 4Unknown and their desire to seek vengeance. They did really well at the start of 2021, but had to skip out on some major tournaments. Their return during the Pro League was not as impactful as they would have wanted it to be. Going into FFIC 2021, we are expecting great stuff from them. Their rivalry against Team Chaos is also something that should be grabbing eyeballs.

Team Elite has been blessed with phenomenal firepower, which they use to decimate the league or group stages of any tournament that they enter. However, this also comes with a curse. They are almost never able to replicate the same level of performance during the finals. This has happened in multiple tournaments, where they’d be all over the killfeed during regulation, but choke during the finals. Will they be able to break their curse this time? 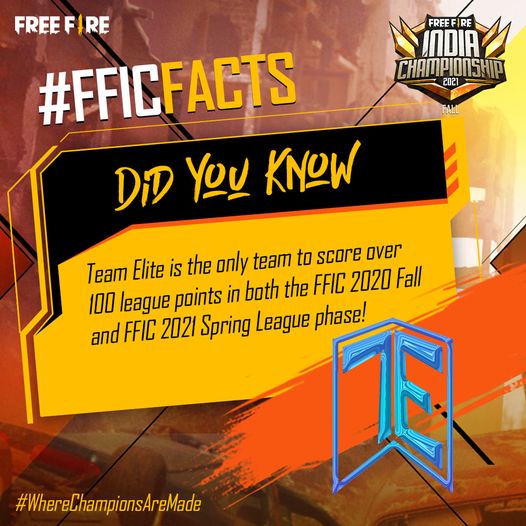 The recent tournaments like Free Fire Pro League and Free Fire City Open were hosted with the objective of breaking the status quo and getting some new faces into the competitive circuit. These two tournaments have showed us that we have brimming in every corner of the country, and all that they need is a little push. We discovered some uncut gems during FFCO, and we are hoping that these new underdogs will be able to find their way to success during FFIC 2021 Fall as well.

FFIC 2021 Fall puts the title of the best team in the country up for grabs. However, one must not forget that this is also a qualifying ground for the Free Fire World Series. All the teams would be working extremely hard to get a chance to represent their country in the next FFWS edition.

These were just some of the things you can expect from the upcoming Free Fire India Championship 2021 Fall. Of course, this goes without saying that the tournament will be full of some high octane action and will keep you on the edge of your seats. Do not miss out on the action! The League stage will be starting from 17th September 2021.