It was our idea behind Free Fire City Open to give the underdog players a platform where they can showcase their skills at a National level. After a series of Qualifiers, City-Finals & Play-ins that went on for almost two months, we now have our top 12 contenders for the FFCO crown. A lot of young & talented esports aspirants, as well as professional esports players across the country, have made their way to the National Finals by fighting against all odds.

It was never easy for the teams to maintain such a level of consistency throughout this long journey. But with sheer determination & a little bit of luck, anyone can rise to the top. Such are the stories of these seasoned champions.  Here, let’s talk about the teams that had a completely different experience while qualifying for the finals. One of these teams stormed into the National Finals by ravaging their regional competitors while the other barely made it by an inch. We are indeed talking about the ‘Captains’ representing Hyderabad Nawabs and ‘Ankush Free Fire’ representing Lucknow Warriors.

The ‘Captains’ excelled through all the departments of gaming when it came to winning matches by a mile. This team knows what it takes to deliver back-to-back Booyahs and showed us how to play a battle royale game. Destroying all hopes of their opponents at the Hyderabad City Finals, the team took 4 booyahs to their name & left the other teams to scramble for the leftovers.

The team scored a total of 146 points at the City-Finals in six matches, which is insane, even by our standards. This towering score is achieved when you add 84 kill counts with 62 placement points. On the other hand, the second ranked team, AY Esports, managed to score a total of 64 points only. That’s what you get when a team makes a battle royale tournament one-sided.

Talking about their dominating performance, team Captain’s leader - Nivesh had shared that he has immense faith in the gunpower of his team and they are better than the lot when it comes to handling the unbearable pressure of the finals. However, our battle-hardened teams from Lucknow have their own stories to tell. 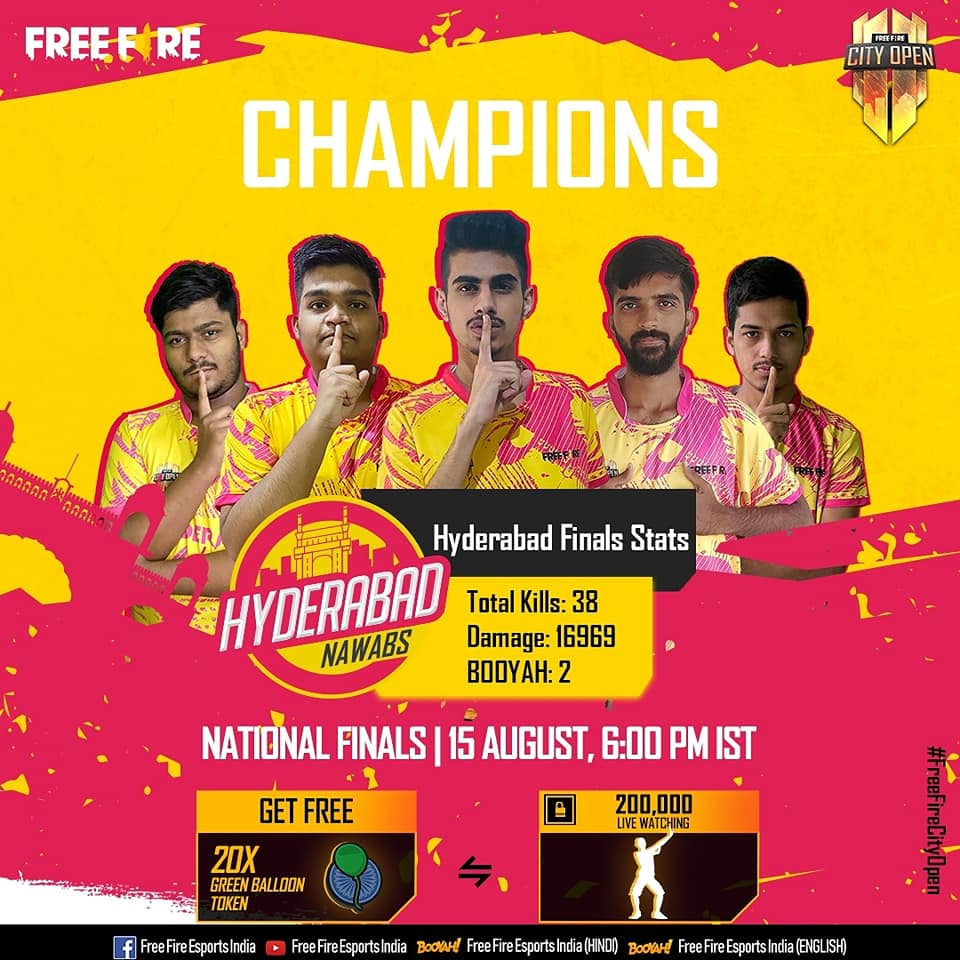 Our representors of Lucknow, Ankush Free Fire a.k.a. AFF must admit that they had to break a sweat to qualify for the finals. However, this team may deserve more credits than our 11 other finalists for topping the points table of the group of death at the FFCO City Finals. Going up against fearsome opponents such as Team Elite, Survivor 4AM and rising talents like Zila Ghaziabad, it surely wasn’t mere luck that the team made it through.

AFF, who will be playing at the National Finals under the banner of Lucknow Warriors, is quite confident that they’ll have an advantage over other teams in the Bermuda map with their central drop location. That being said, there is another top contender from the Lucknow Finals who’ll like to settle the score with AFF at the FFCO National Finals. 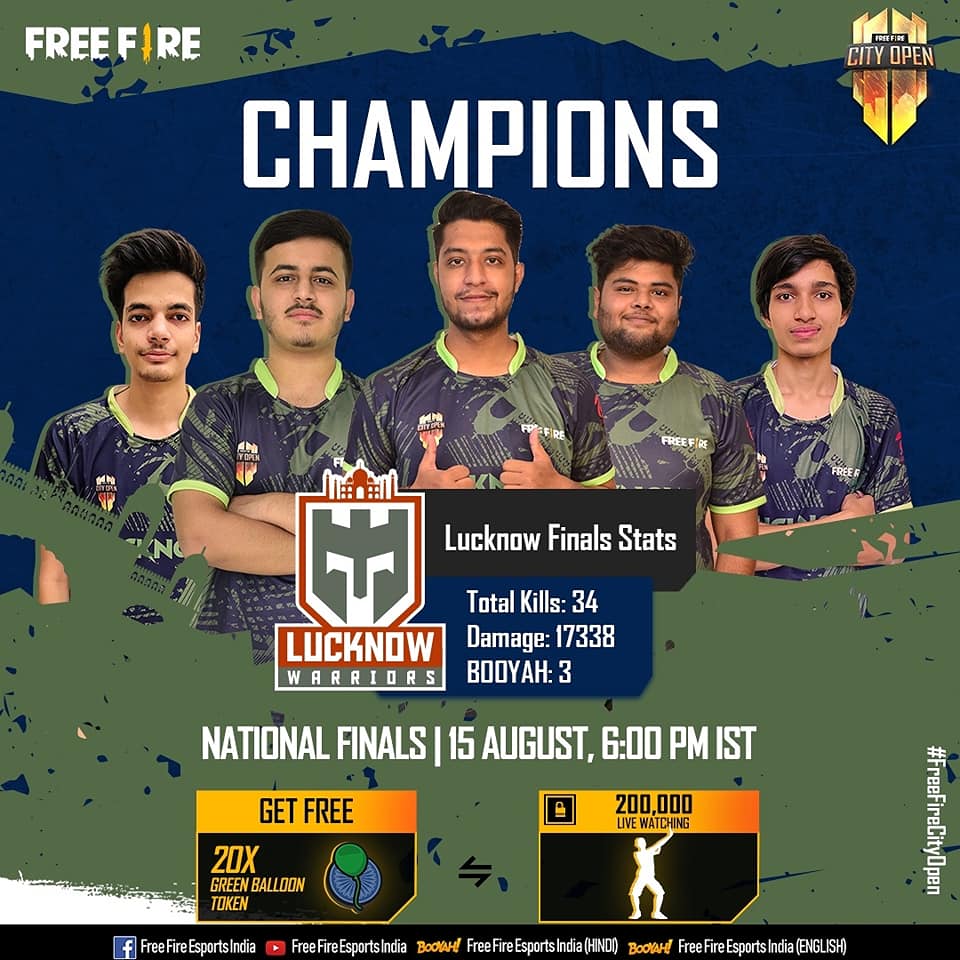 The kings without crowns, this is what they are called and it is the very same curse this team will put their best to remove. Team Elite, who made their way into the finals with a stormy performance at the City Play-Ins, will aim at nothing else but the title of Free Fire City Open Champions.

The favourites, despite being targeted by other teams throughout the Regional Qualifiers, Team Elite repeatedly proved their calibre by decimating the lobby. The team literally scored more than one hundred points in the City Play-Ins which is nothing but sheer domination. 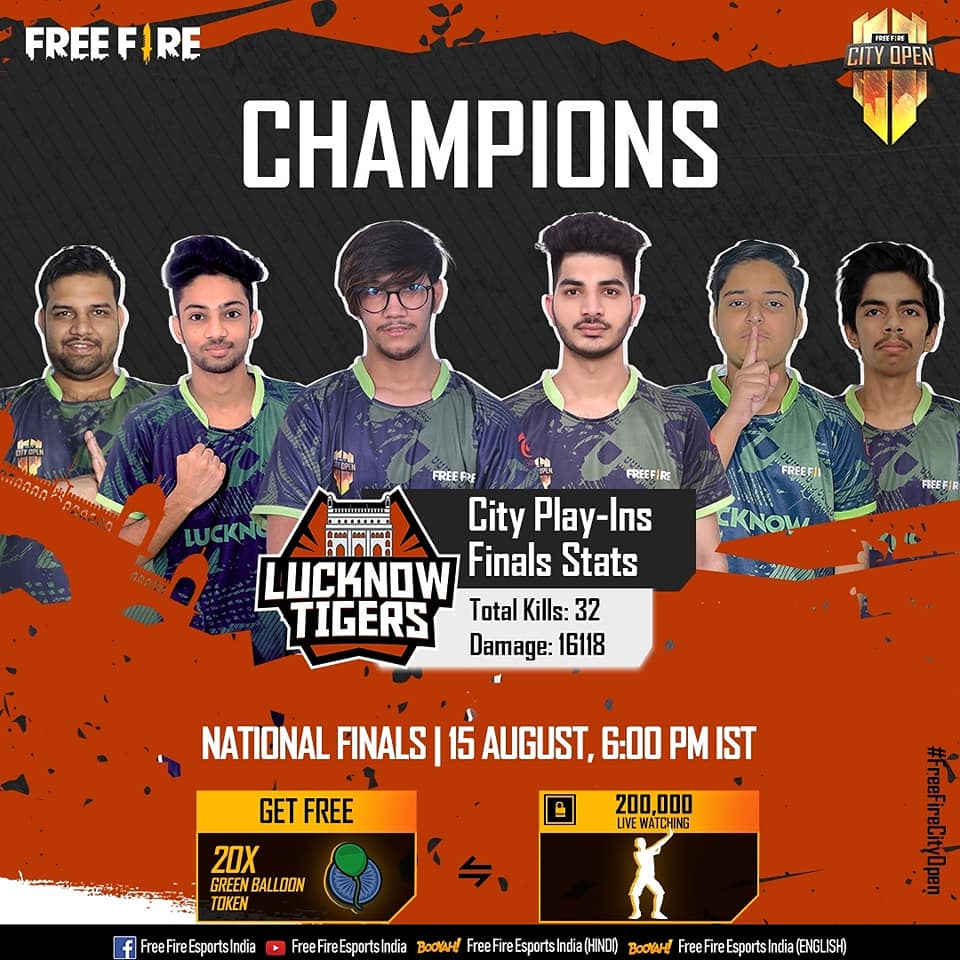 After losing their chance to play in the Free Fire World Series Singapore and a third-place finish at the Free Fire Pro League, only the winner’s crown can give proper justification to their superior skill set. Despite having an MVP like Killer and Pahadi onboard, Team Elite always falls short of one thing or the other at the final stage.  Playing under the banner of Lucknow Tigers this time, it’ll be interesting to see if the team can still reign supreme at the finals when the curtain falls for FFCO 2021 on 15th August.

Make sure to tune in to Free Fire Esports India Youtube channel and cheer for your favourite team. For more information regarding Free Fire City Open, please visit https://ffco.garena.com/