We conclude the second City Play-Ins 2 of the Free Fire City Open yesterday. The twelve teams that did reasonably well in the respective City Finals, but did not qualify for the national finals participated in the stage. Their objective was to get into the top 6 and qualify for the City Play-In Finals. Let’s take a look at how this day unfolded.

Badge 99 was picking up a fight against Flex Esports on the edge of the third circle. They were lucky that this position was far away from every other team and they couldn't get third partied.

When going into the circle, there were no places left for them to hide, so they were forced to just stay inside the water canal, and hope that nobody shot them down. It wasn’t the best position, because it was on the edge of the circle and it did not even provide them with ample cover.

However, the fifth circle changed their fate, as the circle hard shifted towards them. This not only gave them the positional advantage but also forced all the other teams to rotate in a way that they had to fight each other first, instead of fighting B99 directly. Teams like Elite, TSG, 4xtraodrinary, and Raven were funneled into a few houses as they moved from cover to cover. They all weakened each other enough for B99.Sreerag to come in and pick up the pieces with his M79 Grenade Launcher. He was the MVP of his team as he got 6 kills with more than 3000 damage.

Zila Ghaziabad this time got the zone advantage in Purgatory. The circle shifts across the water caused problems for most of the teams and none of the teams were able to make it into good positions. Even b99, the team that got the lead in the previous round crashed and burned early. Zila Ghaziabad had a position in the last circle, but they did not have too much cover. They smartly used destroyed vehicles as cover so that they wouldn’t have to use up all their gloo walls too early. Eye Esports was another team that had a great chance of winning and was picking up several kills by gatekeeping the other teams, but they eventually fell to Zila Ghaziabad in third place. The best performance has to be by TE-Iconic.

Team Elite lost most of their players in a fight against Survivors 4AM, with Iconic being the only survivor. He alone was able to rat his way to second place and get his team some much-needed placement points. He also tried to swipe a few kills away from Zila Ghaziabad by slaying a few members of Eye Esports himself.

Once again, we saw the team that had a good time in the previous match choke in this game. Zila Ghaziabad suffered at the start of the game, and because of that, they slipped out of the Top 6 teams on the Overall Standings. They were not the only team that choked though. Team Elite once again had to settle for second place. The circle closed around Refinery, and as usual, it was a challenging task for most of the teams to get into the circle and establish a safe position for themselves. Team Elite seemed like they would have been able to finally take the booyah in this game, but they choked against Slumber Queen in the final battle. They ended up offering 1v1 fights to the members of Slumber Queen and lost their duels, instead of fighting and trading frags together. Because of this, Team Elite had to settle for the second place yet again, and Slumber Queen took the booyah. Team Elite had nothing to worry about because two consecutive top-two placements meant that they were on the top of the Overall Standings. 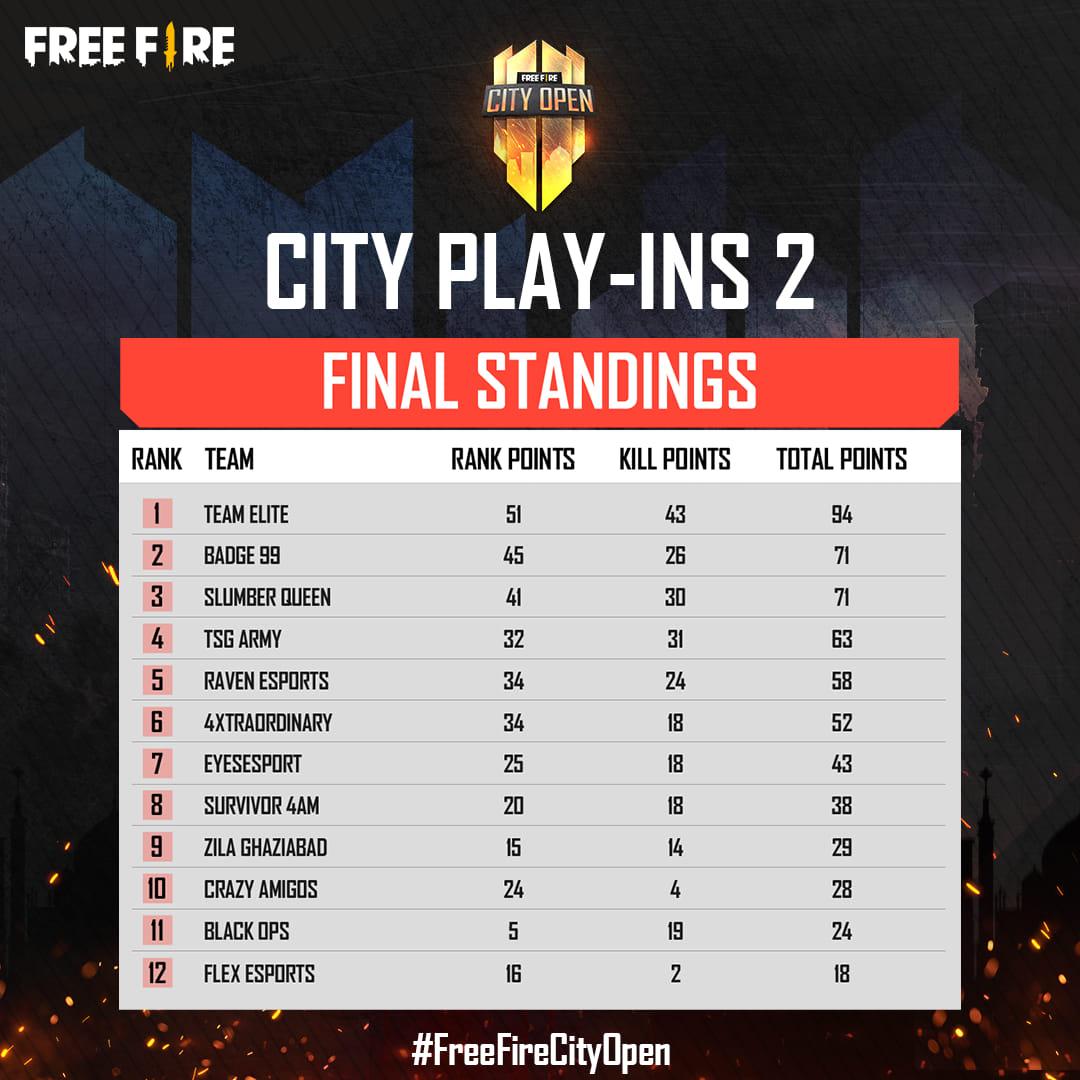 Finally after two games of a second-place finish, Team Elite got the booyah in Match 4. They capitalized on a fight between Crazy Amigos and Eye Esports. After third partying in that fight, they could eliminate them both and capture the high ground for themselves.

On the low ground, Slumber Queen and Badge 99 were hiding in a hut. Once that fight broke out, Team Elite charged upon them to finish the game and get the booyah. This was a massive 14 kill game for Team Elite. The 12 points of the booyah added with it brings their total up to 26 points in a single game. They solidified their position even further at the top of the table.

Raven Esports was able to win this game by defeating Badge99 in the final battle. Both these teams had been doing pretty well for themselves throughout the day, and the booyah helps them legitimize their standings. Badge99 once again had a second-place finish, but the placement points are enough to keep them safe in the top 6. The major concern here was that Zila Ghaziabad was not able to perform well. After Zila Ghaziabad won a booyah in Match 2, they were getting eliminated very early on. They got only three points in three games, which is pathetic. Because they were unable to perform on every other map other than Purgatory, this game was crucial for them as it was their last chance at getting a decent number of points for themselves. In fact, even after winning a booyah, Zila Ghaziabad was dead last on the scoreboard at 12th position. They needed to pull off some desperate moves to get to the top, but with only one game remaining in the day and the points deficit so huge, it seemed impossible. Survivors 4AM were also struggling to some extent. They were in eight places on the leaderboard, not too far away from sixth place. The difference in points was also somewhat manageable. It all hinged on their performance in the last game.

Survivors 4AM, a team that has proven their mettle several times over in prestigious tournaments like FFIC, was struggling against the underdog teams in the FFCO Play-Ins 2. They needed a good performance in Kalahari to get into the top 6, but Team Elite stood in their way. Team Elite recognized that Survivors 4AM can be a threat to them if they qualify for the Play-In Finals. Both the teams hot-dropped in Old Hampton and Team Elite wiped the floor with them. They slew three members of Survivors 4AM, and Ritik was the last man standing. He managed to escape and went from Old Hampton to Shrines to Bayfront. Team Elite, with nothing to lose, did not care about the consequences and just wanted to eliminate this credible threat so that they did not have to face them in the tournament's later stages. They chased Ritik to the ends of the Earth and killed him, thus stomping on their dreams of qualifying. Team Elite’s playstyle indicated that they just wanted to ruin 4AM’s games and did not care too much about winning. But Team Elite, being the perfectionists they are, found a way to win the booyah in the last game even when they did not have the advantage. They were on the Quad Compound to the west of Bayfront overlooking the cliff. The circle did move in their favour, but since they were only a two-man squad, it would have been wise for a team to push them and take the position for themselves. None of the teams took the initiative to do so, and Team Elite got the advantageous position for themselves with no competition. They proceeded to clutch out a 2 vs 2 battle against Slumber Queen and win the game. 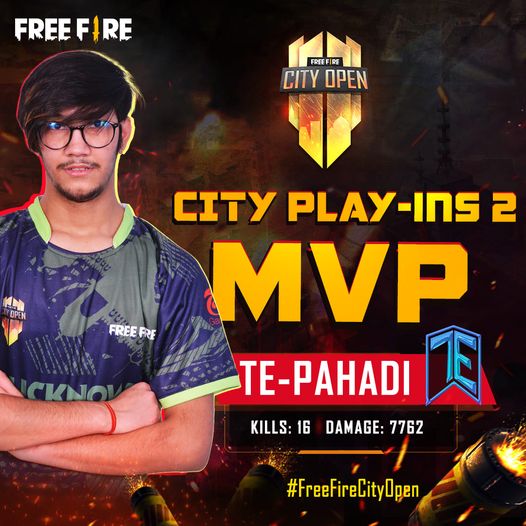 The following teams have qualified for City Play-Ins Finals:

Next, we will be heading to the City Play-Ins Finals on Friday, 30th July 2021.Tune in to the stream on our Free Fire Esports India Youtube channel and cheer for your favourite teams. 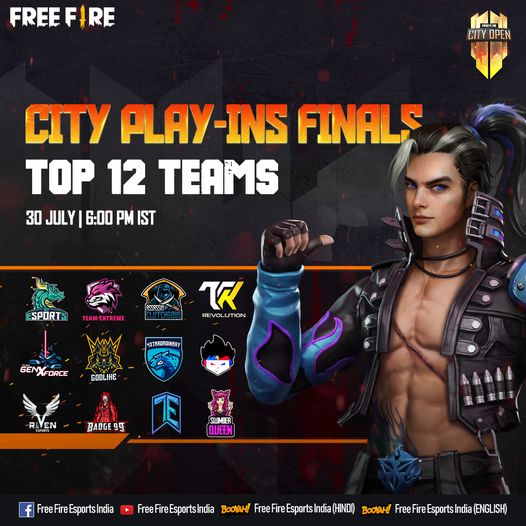