Free Fire City Open follows a very conducive format that grants aspiring pros to carve a path for themselves into the upper echelons of the competitive circuit. All the teams that did well in their respective City Finals, but not well enough to qualify directly for the National Finals, played in the City Play-Ins 1. 12 teams who ranked 2nd to 4th in their City Finals participated in the CIty Play-Ins 1, out of which only 6 will make it to the Play-Ins Finals. The pressure was not as high as it would have been, but then again, these teams are a long way from the National Finals. For now, all they needed to do was get into the upper half of the lobby, which isn’t as easy as it sounds. Let’s take a look at the performance of some of the most notable teams.

This was probably the most popular team in the lobby, having competed in several high-profile tournaments before. Hence, it’s no surprise that they topped the charts. They had a rather slow start in the first half of the day, with not-so-impressive scores in the first three games. When the map cycle went for its second rotation, that’s when they started to pop off. A top-three finish in Round 4 (Bermuda) with kills put them back in the competition. They followed it up with a booyah in Round 5 (Purgatory). They almost pulled off the second booyah in a row, but unfortunately, their momentum was stopped in Round 6 (Kalahari) and they had to settle for second place. But even then, the massive influx of points in the last three games of the day let them sit at top of the charts comfortably.

This is a team that came alive at the very last moment to save themselves from certain elimination. They had several lackluster performances at the start of the day, and their only saving grace was a third-place finish in Round 3 (Kalahari). Other than that, they were not very impressive and were reeling at the eighth spot on the overall leaderboard before the start of the last game. To go from the 8th spot into the top 6, they had to go for gold here. But somehow, they ended up finding diamonds. They won the last map of the day with eight kills, and that catapulted them all the way up to the second spot on the leaderboard.

They were patient up until the last moment. The last zone was tiny and congested. All the teams had to get out of their cover and go for no-man’s-land in the open. GenX Force was on the first floor of a house in Command Post, while Asin Clutchgods were on the ground floor, with Team Revolution across the house on the other side. They jumped out of the first-floor window late, but they all did it at the same time. As a result, their enemies were not prepared to face so many enemies at the same time and they took everyone by surprise. This got them the booyah and also the second palace on the overall leaderboard. 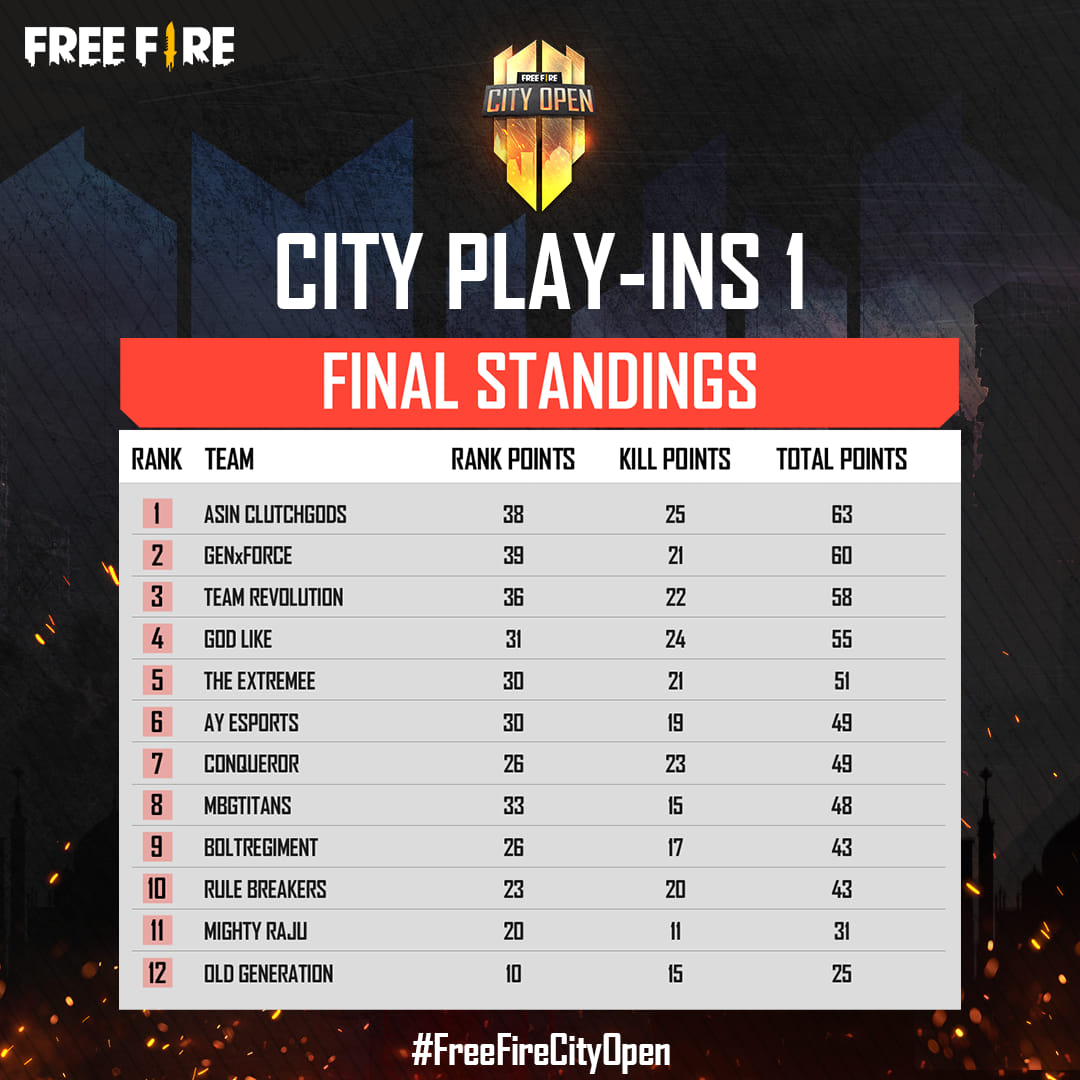 Revolution was one of those teams that did not have a single booyah, but was still able to win because of their consistent top 3 finishes. This must-have upset so many teams, especially those that won a booyah in the first few games of the day, but were still unable to qualify. Just like Asin Clutchgods, Revolution too started to pop off late. They somehow snuck their way to second place in the fourth round (Bermuda). However, they did not shy away in Round 5 (Purgatory), where they finished third with 8 kills to their name. Once again, stealth and a better sense of positioning helped them get to second place in the last game of the day. With a great number of placement points in the last three games of the day, Team Revolution finished at third place on the overall leaderboard.

This team was a one-trick pony. While they were getting a decent amount of kills all throughout the day, they became relevant only when they were able to get the booyah in Round 4 (Bermuda).  Their split approach seemed to get them the edge. While most of the teams were able to guess the zone properly, racing each other to the next zone seemed to be something that was a problem for everyone. In order to solve that problem, GodLike sent one of their players ahead to dibs their spot in the finals. The other three players would follow that carved path and get inside the tiny circle, in the end, this stealing the momentum from other teams away.

Now, this is a team that is the opposite of Team Revolution. While Revolution relied on positioning, The Extremee wanted to fight as much as possible. They had an explosive start as they finished in the top 3 in the very first round itself (Bermuda). The other Bermuda map also turned out to be lucky (Round 4), as they finished second on that map, this propelling them into the top 6 teams and qualifying for the Play-Ins Finals.

AY Esports barely managed to get past. They were tied with the Conquerors at 49 points each. Yet AY Esports qualified because they had higher placement points than Conquerors. The funny part is that Conquerors had won a booyah on that day, but AY Esports had not. Yet somehow, AY Esports had more placement points than them. They finished in the top 3 in Rounds 2 and 3 (Purgatory and Kalahari), and another second-place finish in Round 5 (Purgatory). They were reeling in seventh place on the overall standings by the end of the fifth round. But Conquerors finished dead last in the last game of the day, providing much-needed opportunity and room for AY Esports to snag that spot away from them. 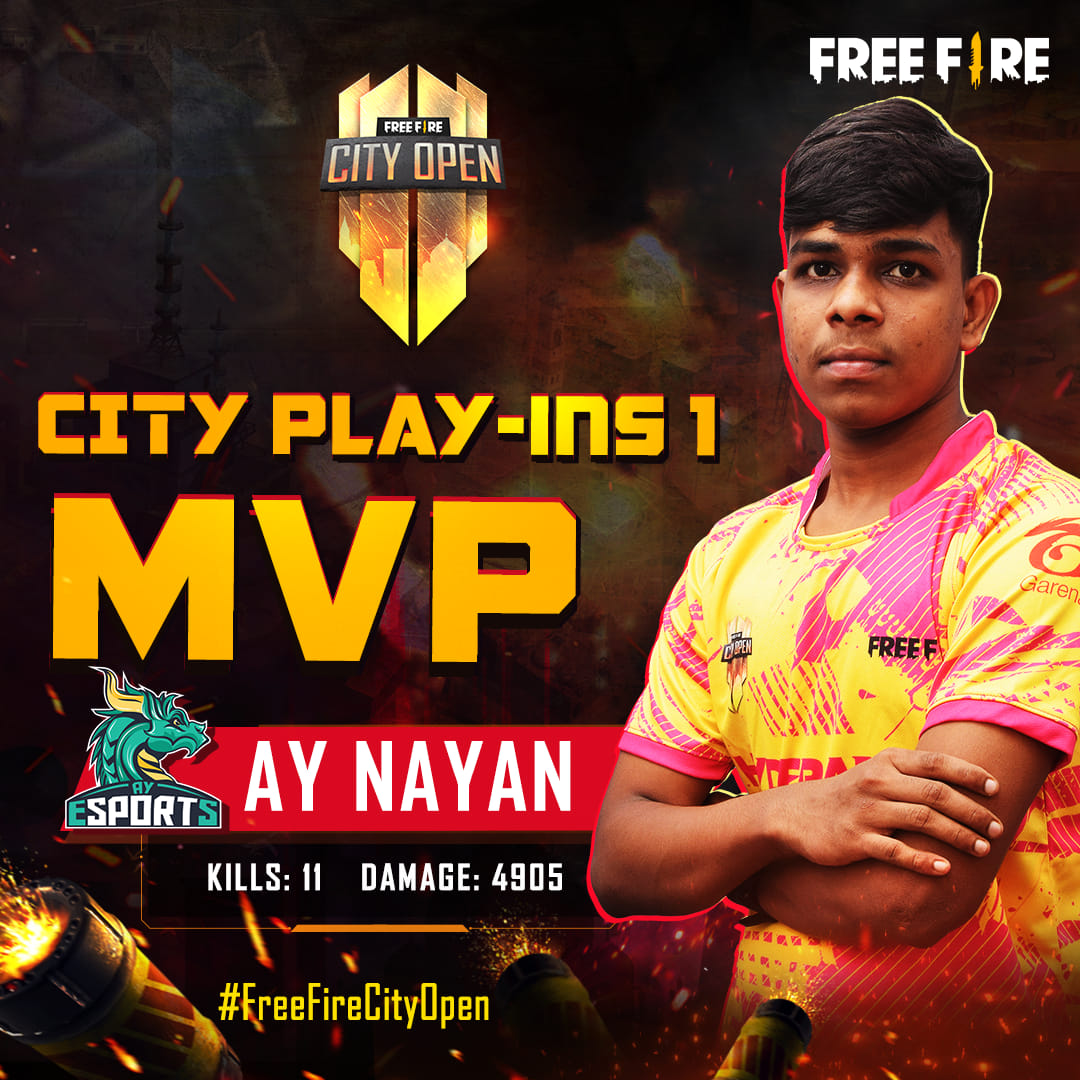 Teams that performed really well in the first half of the day were somehow not able to seal the deal as the day progressed. Rule Breakers won the first game of the day, but they choked hard. MBG Titans almost got the booyah in the first game, but it was stolen away by Rule Breakers. MBG Titans quickly followed up on this rivalry by blowing up their enemies to win the second game. Last but not the least, Conquerors won the booyah in the third round, and were on the verge of winning. Unfortunately in Round 6, they finished in the last spot without any points. This gave AY Esports an opportunity to out-score them and head for the Play-Ins Finals.

This was the story of the first City Play-ins. Next week, 12 more teams will gather in the FFCO City Play-Ins 2, out of which once again only six will make it to the Play-Ins Finals. Tune in to find out on 27th July 2021, at 6 PM IST on our Free Fire Esports India YouTube Channels. 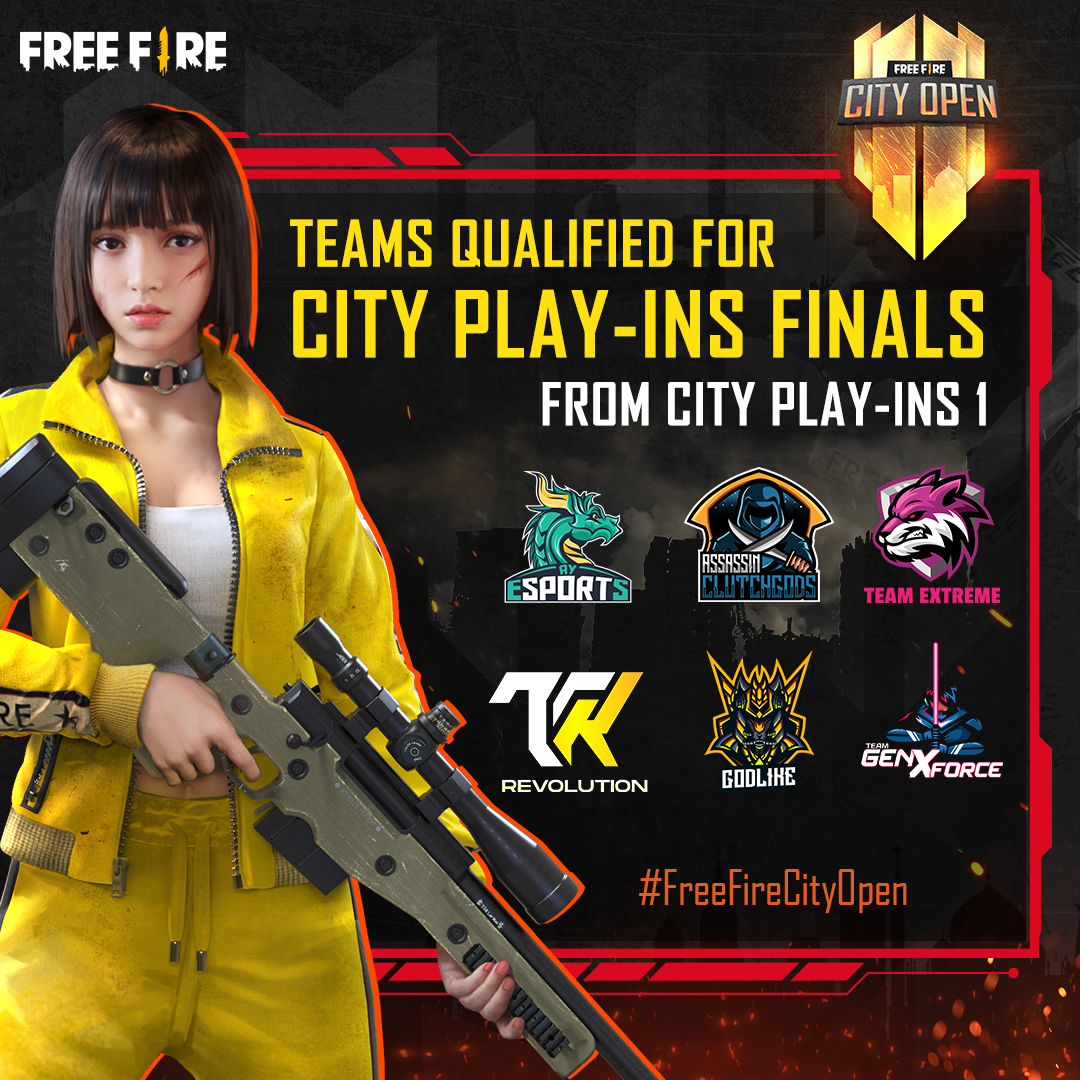