Six days of intense Free Fire action has given us the twelve finest teams of the country who will be duking it out in the Free Fire Pro League 2021 Summer Grand Finals to win a lion’s share of the INR 35 Lakh prize pool. The last two days of the tournament kept us on the edge of our seats. Some of these players made our jaws drop. Let’s see who those players were.

This one is no surprise. Pahadi has been the MVP of several high-profile tournaments over the course of the last 1 year, and this time too, he leads the charts. He was the only player who had average damage of more than 1200 per game. To draw a comparison, nobody else was able to get to the 1000 damage per match. Hitting 4 digits in the average damage counter itself is considered a big deal. He not only shattered that myth, and went way beyond it to set new records. With 11 kills on Day 5 and 14 on Day 6, Pahadi was invincible this week. His numbers are way higher than anyone else.

Of course, there has to be more than one Team Elite player in the top 5. They were leading the points chart with a lead of more than 100 points. They won 9 booyahs which is more than enough to skyrocket their placement points.  But on top of that, it was their kill points that got them this ridiculous lead in the first place. Pahadi was the one making the big impact plays and dishing out the most damage, but Iconic followed up behind Pahadi and they backed each other up. This deadly duo was unstoppable. Team Elite won two booyahs on Day 6, Iconic was the MVP on Bermuda, whereas Pahadi was the MVP on Kalahari. Iconic bagged 12 bodies on Day 5, whereas both of them had 14 kills each on Day 6. It does not matter which one of these players is #1 or #2, they both brute-forced their way to victory. We have never seen such a dominant performance before. It seems like Pahadi and Iconic have both ascended in their gameplay way above the leagues of their other competitors. With such performances, Team Elite can not only dominate the teams in South Asia, but also go up against the other top teams of the continent. 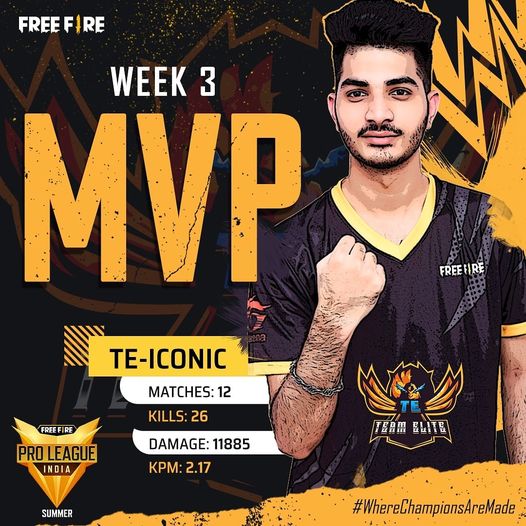 4Unknown did a pretty good job in the first week of the tournament, but they started to slip up in the next. They did not have a lot of wins this week, but they did have some good consistent placement points which helped them retain their spot at the top. They were run over by Team Elite, but at least they managed to keep all the other teams behind them as they finished second. A major contributor to that was Deadsoul. He was not only getting frags for his team, he was the one who would rush into compounds and clear them out so that his team could hold those positions and stay alive. He had the most kills on Day 5 (13 kills), and was making plays that got his team not just those kill points, but the placements too. Deadsoul created a lot of impact for his team in terms of the space he created for his team to occupy.

Here is a player that enabled his team to clutch a spot in the grand finals. Total Gaming was struggling quite a lot in this tournament. They were reeling at the 14th position on Day 5, which meant that they wouldn’t qualify for the Grand Finals. They were in danger and somehow needed to get into the top 12. Then on Day 6, Mafia showed us a whole new side of himself. He got 10 kills on that day, and even though that does not seem like a lot, when compared to the players that are on this list, all of those kills were impact frags that got his team from the 14th position to the 8th position in just a single day. Mafia is the reason why Total Gaming have qualified for the Grand Finals of Free Fire Pro Leauge.

Not too good, but definitely not someone you can ignore. TSM-FTX did not seem at the top of their form this time. They did not make too many flashy plays, but they were making SOME plays all the time. They finished in third place, behind Team Elite and 4 Unknown. We are guessing that they haven’t revealed their final form yet and might have a surprise in store for us during the finals. While the team overall does not have as many kills as the other two teams, they did have OldMonk who was shooting everyone down. Once he goes into his zone, his state of trance, he spits fire and pumps his opponents’ guts full of lead. He was very proficient with assault rifles and shotguns this week. He had 9 kills on Day 6, and was able to get his team a boat load of placement points too.

These were the most impactful players of Week 3 of the Free Fire Pro League 2021 Summer. The Grand Finals are scheduled on18th July 2021 at 6 PM IST. You will get to see these players there in action once again. Who do you think will win the Pro League title? Tune in to our Free Fire Esports India YouTube and Booyah Channels to find out. 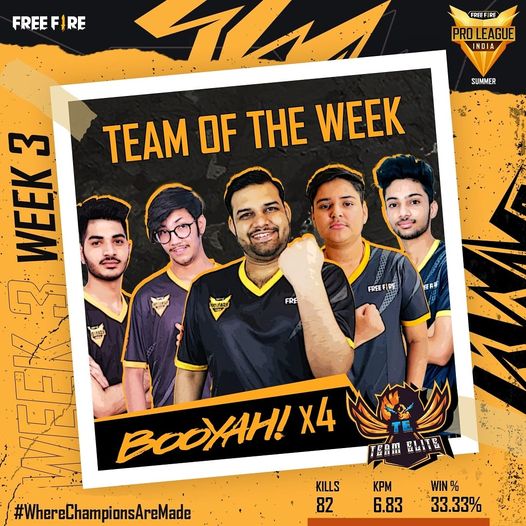