Free Fire Pro League continues to deliver spicy storylines and score chases. This week, on Matchdays 3 and 4, we saw the race for the top of the table get heated up between Team Elite and 4Unknown, whereas the other contenders try their best to get into the top slots. Here are the best storylines from the last two days.

It doesn’t matter how difficult or unpredictable the zone is. Team Elite proved that their game sense and map presence is superior to everyone. We started Day 3 with one of the most unique zones ever on Bermuda, where 70% of the final circle was in the water, and only a tiny fraction of Sentosa Island was still available in the play area. Team Elite, not only pulled off some well-timed and calculated rotations across the bridge but also ruined other team’s plans of doing so. They landed in Cape Town and kept tabs on the bridge that connected that city to the Island. By cutting off the rotations of anyone who was trying to cross the water. Next, they besieged the teams that did manage to rotate early, thus proving that they are the masters of land as well as sea. Winning challenging games like these proved their mettle.

Their rotation magic paid off dividends in the next game too. Purgatory is a wide open kill-field, and getting third partied is pretty common. While Team Elite were looking to capitalize on a fight between TSM and Galaxy Racer. But they were not the only ones looking to score a few extra kills. Like moths to a flame, even Survivors 4AM entered the fray. This deadly four-way battle would have been a bit too much for anyone to handle. Sneakily, Team Elite slipped away back into the compound that they were holding. Disengaging at the right moment ensured their survival. They swooped in at the end to win their second booyah in a row. With this, Team Elite had put a significant amount of points in between them and all the other teams. 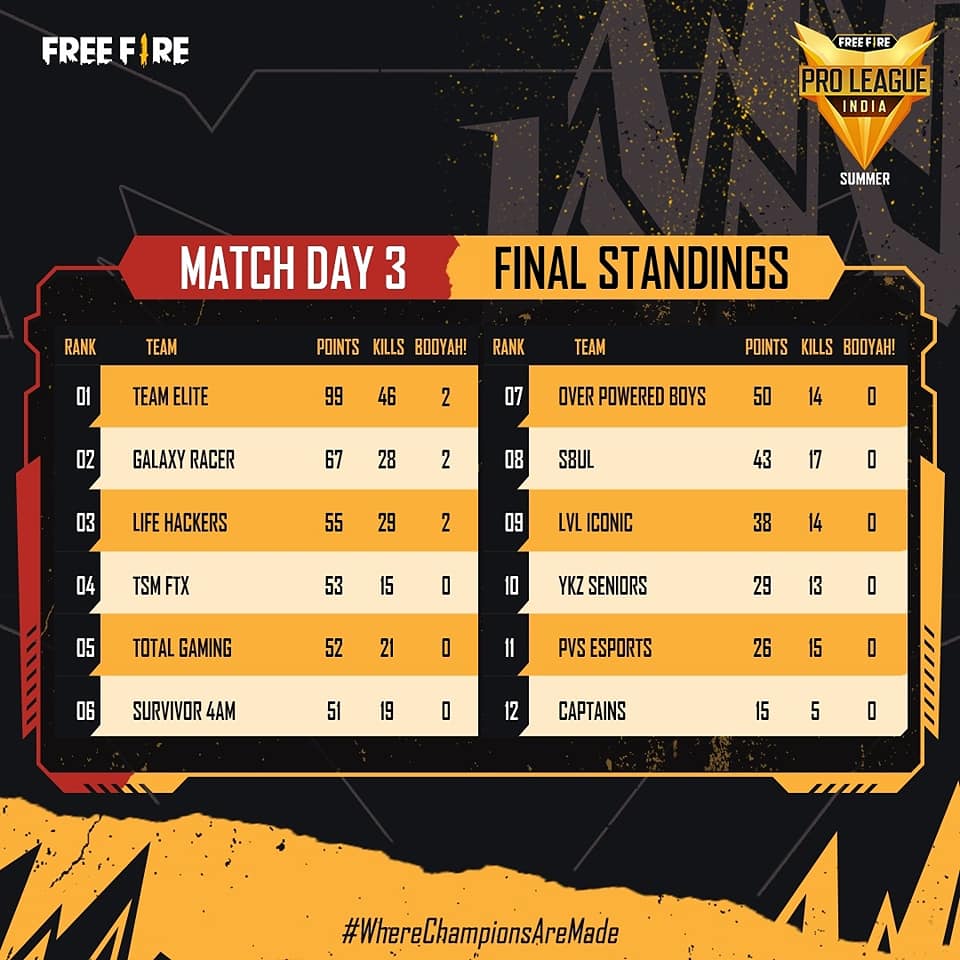 The next two games after Team Elite showed their dominance were taken over by Life Hackers. They played in a very convservative manner where they only started to participate in fight after the third circle. Till then, they avoided every move possible. They used the momentum of other teams to their advantage and got the booyah in the third game. They used a similar formula to win the fourth game too, thus winning two in a row.

Galaxy Racer tried pulling off a similar feat. Their smart rotations and good third-party timings got them the dub on the fifth and sixth games of the day. But even though every team won two booyahs each on Day 3, it still did not allow those two teams to get anywhere close to Team Elite. The table toppers Team Elite scored 99 points on Day 3 alone, thus bringing their tournament total up to 200 points. The closest to them was TSM-FTX, who was in second place with 141 points. With a gap of approximately 60 points, Team Elite ended their week with a comfortable lead.

As we moved on to the next day, several teams stepped up and showed us what they are capable of. But for the most part, no team established their dominance here per say. All the six different games were won out by six different teams. This makes this one of the most closely contested days in Free Fire. 4Unknown started the day with a win in the first game, followed by Galaxy Racer in the second. Ankush Free Fire, Last Breath, Captains and S8UL were also able to win a game each. 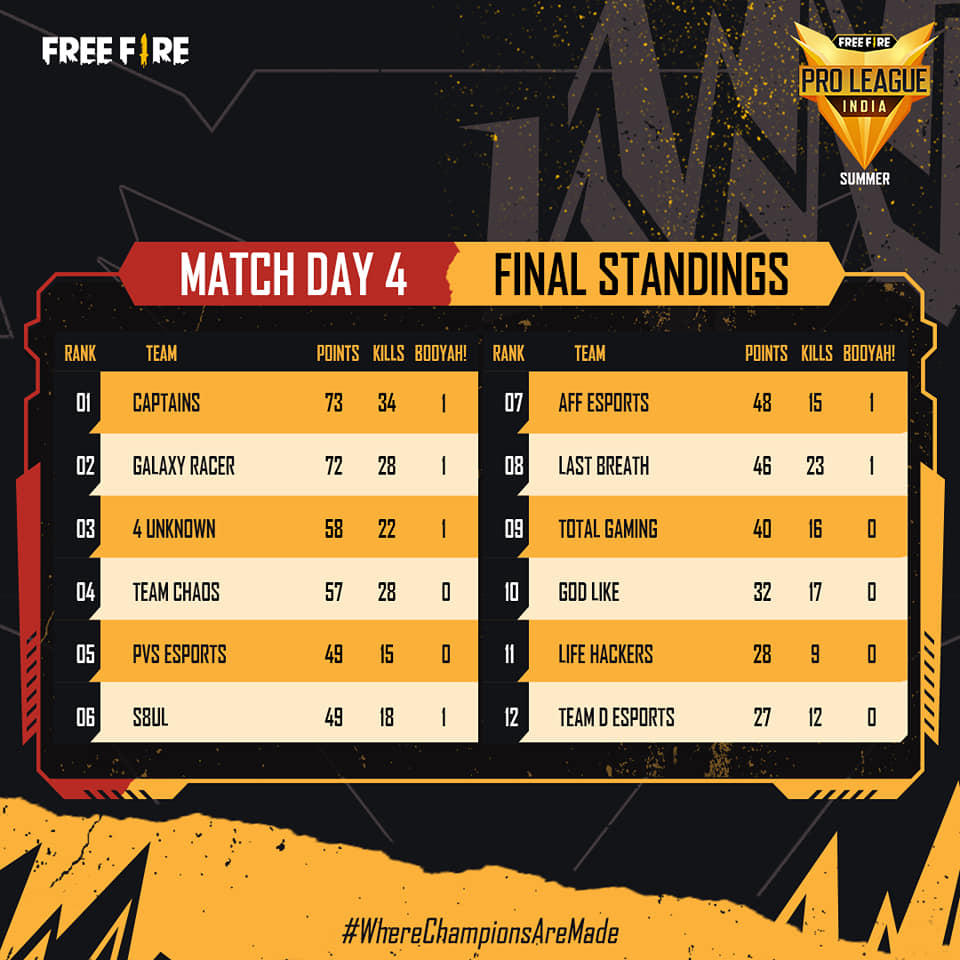 On Day 4, only the teams from Groups A and B were playing, which meant that two of the most dominant teams, Team Elite and TSM-FTX were not playing. 4Unknown tried to capitalize on this chance and reclaim the lead that was stolen away from them yesterday. They won the first match, and also got several top 3 finishers later on during the day. But despite that, 4Unknown was only able to get to second place with 194 points. Team Elite were still in the lead with 200 points. They did not even play on Day 4. Team Elite have played 6 less matches than 4Unknown, yet they are ahead of them in terms of points. This shows how much Team Elite was able to dominate on the third day itself. So much that they don’t even need to show up on Day 4 to maintain the lead. 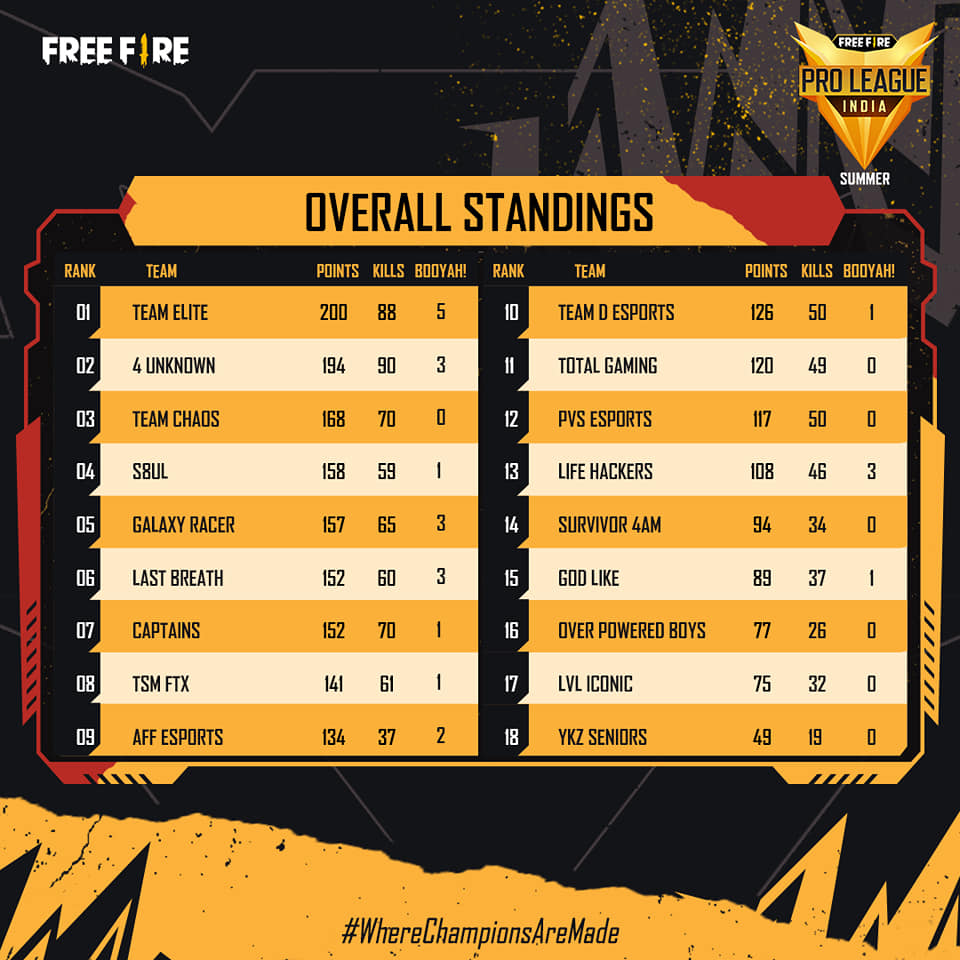 Team Chaos was unable to get themselves a dub, but are still in third place because of their consistency. Team S8UL was able to clutch out a difficult game.

Team S8UL was able to push forth and enter the top 5 because of the booyah they picked up in the last game of the day. Same goes for Galaxy Racer, who on the back of their double-booyah on Day 3 and a win on Purgatory on Day 4, found themselves safely embedded in the top 5.

FFPL 2021 Summer Matchday 3 and 4 were absolutely bang on. Free Fire in India has never been more close and more competitive than it is right now. Don’t miss out on some of the most enjoyable moments of FFPL. Make sure you tune in to Free Fire Esports India Youtube channel for the next Match Day on 10th July 2021, at 6 PM IST.

Also, Don’t forget to create your Dream Team in the game, and enjoy the matches with a chance to win some exciting prizes.