The Finals of the Free Fire Tri-Series are about to begin very soon. Over the course of 6 excruciatingly difficult and heart-pounding league days, the teams worked hard and grinded to qualify for the finals. At the end of it all, we must applaud the best players of the 6 match days for all the hard work that they’ve done and for all the moments they stole our breath away. Let’s take a look at the top 5 players of the FFTS in Week 2.

MrJayYT, more like Mr. Consistent has always been the backbone of his team, and this time is no different. He was the MVP for his team during the FFIC 2020 Fall as well as FFIC 2021 Spring. His performance in FFTS is no surprise. However, what is surprising is how different his playstyle has become. He isn’t the usual heavy hitter he once was. We believe that he might have been working on his skills as a support player too. Let’s see if he can carry his team to victory during the finals. He stands in fifth place with 35 kills and 22074 damage.

Iconic has always been the star player of the team. While his teammate Pahadi might take the cake for the brighter star this time, Iconic lives his life to the fullest, believing in the motto “better to burn out than fade away”. He takes the risky fights for his team and turns them into advantageous situations for his teams, even if it's at the cost of his own life. This aggressive approach got him 41 kills and 25098 damage this time.

Iconic won’t have to lose his life though because he knows Killer has his back. Killer and Iconic have become our new favourite power duo. While Pahadi and Jonty might be variables who either flank or initiate, depending on the situation, you will always notice that Killer and Iconic are together, ready to trade frags for each other. His wonderful synergy has resulted in so many team fights going in their favour. While Killer might have more kills as he is usually the one that gets the trade, Iconic has more damage. Killer currently has 42 kills and has dished out 20461 damage.

House of Blood has made a meteoric rise in the second week of the tournament. For the most part of the tournament, they did not have a single booyah and were in the top 3 on the basis of just their kill points. Finally, in the second week, they were able to put up one win on the board and it was all thanks to Kai’s positioning and impact. Even with a very low number of booyah wins in their bag, they stand second and have given Team Elite a run for their money on several occasions. Kai had 47 kills and dished out 26926 points of damage in the league stage. 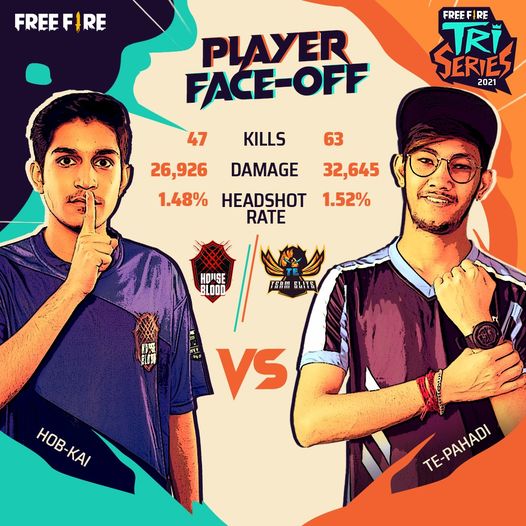 Sitting on the tippy-top of the hill of corpses is the king of the kill - Pahadi. He picked up an insane amount of kills - 63 to be precise. He is the only player who’s hit a half-century and went beyond. With 32645 damage, nobody else comes anywhere close to him in terms of dominance. Once he gets his double bolt-action sniper setup online, he becomes unstoppable. The only hope you have is to kill him by isolating him away from his team, which is rare considering how well they support each other. We’ve never seen Team Elite this dominant before, and maybe their new strategies with Pahadi at the helm will win them the tournament.

These players, along with many more will be playing the finals of the Free Fire Tri-Series on 24th April 2021. Be sure you don't miss out on the live-action and win an exciting reward.