The second week of the Free Fire Tri-Series kicked off today. Day 4 brought with it some unexpected surprises and caused a few shifts on the leaderboard. With several great moments and even greater comebacks, this is Free Fire entertainment at its finest. Let’s recap everything that went down today.

Team Elite starts the day off with a bang, no surprises there.

They had 199 points before the start of the day. They ended the day at 268 points. At this rate, we fear that they might cross the 300 point mark soon, whereas no other team has touched even 200 yet. They managed to win the booyah pretty convincingly in the first match in Bermuda. The circle moved towards the Bimasakti Strip. While several teams had fights breaking out in the valley of houses, and some were even trying to control the gas pump compound, Team Elite walked in like bosses. They stayed silent for the first few circles. When there were 6 teams remaining, they captured the gas station with brute force. They stayed on that high ground and watched all the teams down in the valley with an evil grin. Like shooting fish in a barrel, the others had no chance against their timing and positional advantage. They did not even need the zone advantage to win this.

Extreme Ex dominating Purgatory is the purest form of consistency

After a great start to the first game, Team Elite was on their way to win the second game as well. They had the high ground advantage in fields, and when there were only three teams remaining, they won against House of Blood without losing a single player. After this, the only team standing in their way was Extreme Ex. But even though Elite had the high ground and got enough time to heal themselves after fighting HOB, Extreme Ex made better work of them. They one-upped Team Elite by rotating into the zone first, as a result, they did not have to be paranoid about the circle on their back and had the space to work with. Keep in mind that none of these teams inherently had a zone or man advantage. But EXE - Azim helped them win with three important kills. TE-Iconic lost his life to the zone and Extreme Ex took home the win.

This wasn’t all. In the next game of Purgatory too, in Match 5, they won the booyah yet again! It was a typical Brazilia battle. Lots of teams and players, not enough real estate. Teams had to go from cover to cover and were only leaving their compounds when the circle forced them to.

In games like these, it becomes difficult to enter the circle because there are several gatekeepers, plus the circle forces you to stay on your feet. In a situation like this, Extreme Ex somehow managed to stay on the edge of the circle but kept clearing enough room to keep moving forward and not get stuck. They wrapped up whatever fights they picked up quickly, and avoided third parties like absolute bosses.

By winning both the games of Purgatory today, we are convinced that if they can replicate this success in the finals, it’s a wonderful trick to have in your pocket. Team Chaos is generally considered to be the best on Purgatory, but with this, they now have some serious competition. 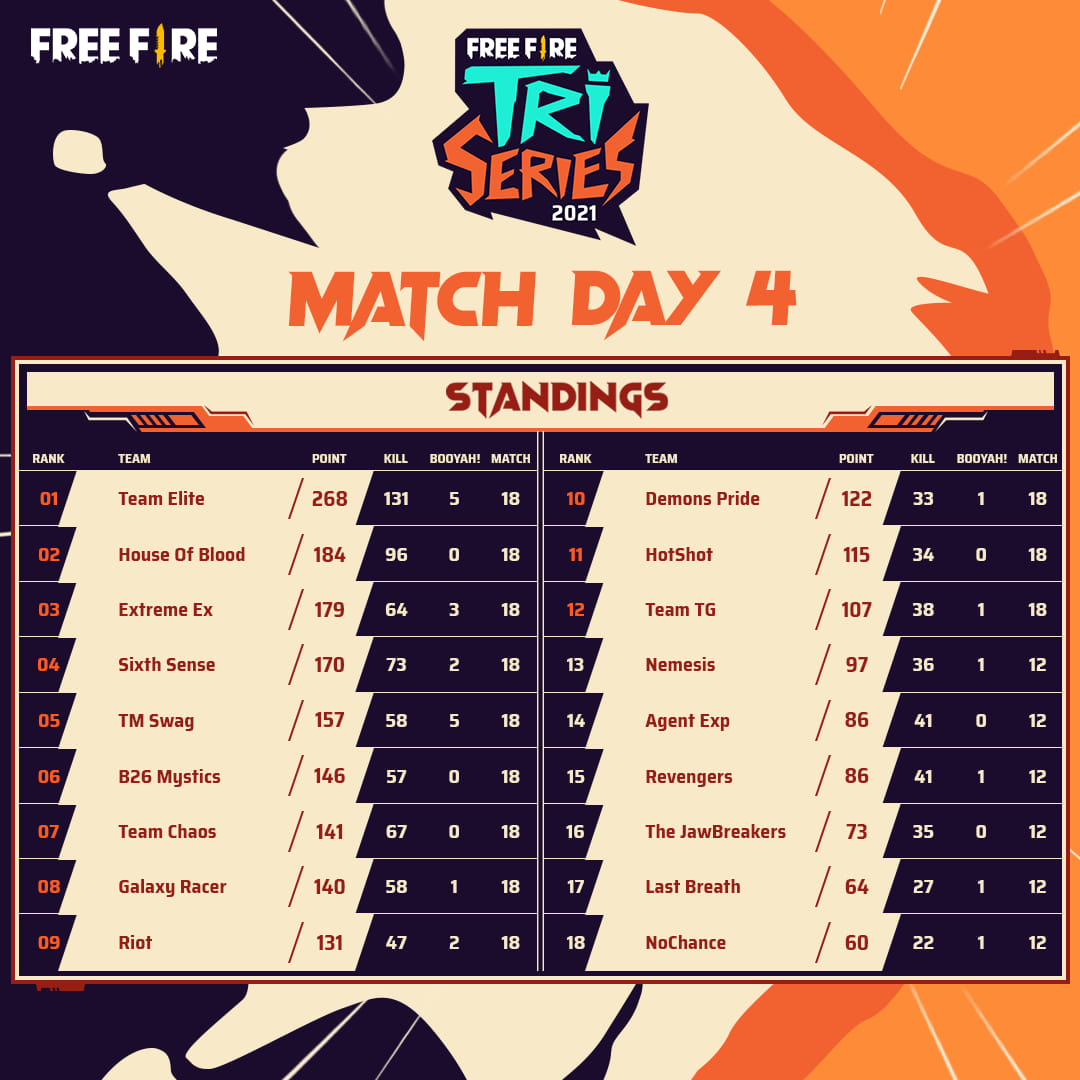 Team Sixth Sense won the third game on Kalahari. They made some brilliant decisions in terms of rotations. They won the game with a decent amount of kills and were giving House of Blood a good run for their money. However their win on Kalahari and the several kills that they picked up in almost every other game did not contribute as House of Blood and Extreme Ex overtook them, and Sixth Sense descended down to 4th place.

TM Swag won the fourth game of Bermuda. They had a decent satisfying victory as they steered clear of any trouble throughout the mid-game and won the last battle on the basis of good fundamentals and trade fragging. They started the tournament with a win on Bermuda and continued their tradition today. However, despite that, they couldn’t maintain their lead and are now down at 5th place.

They are currently in second place on the leaderboard with no wins! They have 96 kills and 184 points. This sheer level of consistency shows that the FFWS contenders definitely cannot be taken lightly. That being said, they were not the only Pakistani team that performed well today.

Demon’s Pride also bagged their first win of the tournament. They found themselves in the center of the circle in Kalahari and were able to defend their compound well. They had been struggling in the tournament so far but maybe this win might mark the beginning of a comeback.

That was a quick recap of Day 4 of the Free Fire Tri-Series. There's more action in store for you tomorrow, so make sure you tune in to the Day 5 stream.