Matchday 3 of the Free Fire Tri-Series brings the first week of the tournament to a close. It was a pretty interesting week as the power struggles drew several interesting storylines. Team Elite is miles ahead of the competition, almost breaching the 200 point mark, whereas Sixth Sense is trying to play catch-up. With these two teams on the top of the board, Extreme Ex and TM Swag, who did pretty well for themselves at the start of the tournament have slipped down to fourth and fifth place respectively. House of Blood - the Pakistani FFCS representative might have struggled to find footing at the start of the week, but they made a massive comeback yesterday to take the third spot even though they don’t have a single booyah! Let’s deep dive into all that went down on the third day.

Team Revengers had been trying to get a win from the first day, but they had been pretty unsuccessful at that. They can fight really well, they can deal plenty of damage, and are a dangerous squad to go up against if you’re fighting them 4vs4. But whenever a third-party situation happens, or when they need to rotate via a crowded zone, they aren’t able to deal with the pressure. This time finally their rotations did not cause them to run into any traps, and they were able to isolate teams. They survived in a three-way battle situation where they dealt with Galaxy Racer and Agents EXP at the same time. They did not just survive, but they thrived, using the momentum they gathered from that fight to keep going. They won the booyah with 10 kills.

TM Swag came back in style

Team Chaos is usually considered one of the strongest teams on Purgatory. It’s their home turf. But still, TM Swag were able to beat them there. The final circle ended in a good old Brazilia battle, where several teams were hunting for a safe space. Team Chaos, as always excelled in such situations and used it to their advantage. TM Swag followed them like a shadow and stuck close to them. They piggybacked off of Team Chaos’s momentum and finished them off, in the end, to steal the win away.

Grappling hooks are one of the most important survival tools in Kalahari. Most people use it to gain elevation and high ground, or cross valleys and hills that would have taken them too much time to do on foot. In the highest levels of competitive Free Fire, there are several predetermined spots that people try to take advantage of that offer the most value out of the grappling hooks. For example, getting to one of the high towers in the Refinery or using them to cross the valley on the southern side. Most people conservatively use their grappling hook charges and try to save them from absolute dire circumstances. Members of Team Riot did something completely different today. In the final battle against Galaxy Racer, one of their players Ratul used it to cover only a small amount of distance on flat ground. It’s the kind of situation that one wouldn’t ideally use it in. But he used it to only get closer to his teammate to trade frags. By using that hook (even though it was not in the most creative way) he was able to get closer to his teammate Ahnaf and double peek at their opponents. These are some small things that ended up creating a big difference and let Riot win their first game. Even then, Galaxy Racer had more points than them because of the kills.

In the fourth game of Bermuda, Riot again found themselves in a favourable situation. This time they had a small trio of huts on the beach next to the bridge that connects Sentosa Island to the mainland. Even though the other teams had a height advantage, they had solid cover. They recognized the strengths and weaknesses of the position that they were in and did well to cover the chinks in their armor. They even managed to outscore Galaxy Racer this time. This boosted up their points by quite a lot and got them into the top 5 on the overall standings. 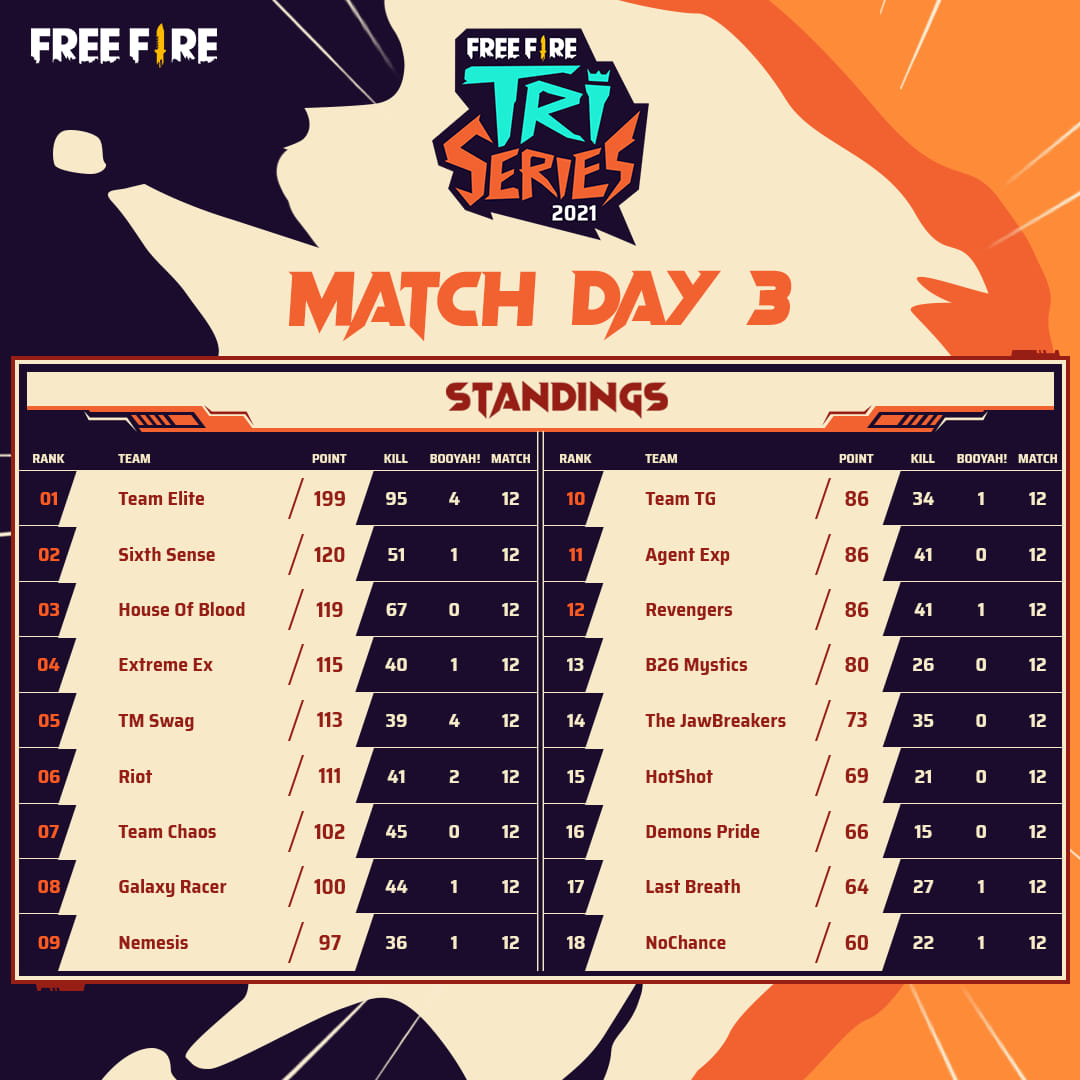 Agent EXP really went berserk this game, getting 10 kills. First, they picked up kills from several different squads while rotating in the third circle. The circle hard shifted north and they were able to move into it while applying plenty of pressure onto the teams trying to make that big rotation. Even though they lost two players in the process, the surviving duo trucked on Later on as the circle shrank even further, they finished off the players of Nemesis who was toying around with House of Blood and stole a few kills too. They got plenty of kills in the bag but unfortunately couldn’t win the final battle against TM Swag who had the man advantage. Still, it was a great game for both TM Swag and Agent EXP.

Nemesis finally get a win and deny Riot a hat-trick, while Team Chaos continues to pop off

Team Chaos was a ridiculously good team in this game, even better than what they were in Purgatory. With 12 kills and a top 3 finish, they had a stellar game. While they couldn’t win the final battle against Nemesis, that’s alright because they still outscored them on the basis of their kill points.

All in all, several underdog teams today managed to win today and put up some points on the board for themselves. We saw some changes in the leaderboard. But even though Team Elite were not playing today, they had built up enough of a buffer for themselves to stay on the top throughout the week. Will they be able to maintain that in the next week? To find out, watch the Free Fire Tri-Series on 16th April 2021 at 2 PM IST on Free Fire Esports India Youtube channel.

If you have missed the live-action for Day 3, check out the Frag highlights here.