The action continued on Day 2 of the Free Fire Tri-Series, where the best teams of India, Pakistan, and Bangladesh went up against each other to be crowned as the best team in the sub-continent. Today, teams from Groups B and C went head-to-head in a brawl. Without further ado, let’s jump right into the recap.

Team Elite and Agents EXP dominate consistently throughout the day, it all started from the first game

Agents EXP had several kills going into this game as they were not hesitant to pick up fights. They started their onslaught by wiping out NoChance. Next, they encountered Team B26 Mystics and wiped them out in a matter of seconds. They continued this wonderful aggression as they made their way deeper into the circle. Team Elite too, had a few scalps as they made their way in. They took down Extreme Exe and continued their run of form. Their next target was Revengers, and they too did not stand a chance against Team Elite.

In the final circle, Agents EXP, Team Elite, and Sixth Sense remained in the final circle. Unfortunately, the zone took out Agents EXP as they got circle screwed, but 6S - Stoner had a realistic chance of clutching the game out. TE-Killer stepped up in the end and won 1v1 against Stoner to secure the win.

Even though Sixth Sense finished second in the game - Agents EXP were ahead of them in points because of their kills. Both Agents EXP and Team Elite had 12 kills in that game.

At last, Last Breath start to show a sign of resurgence

Purgatory was a weird game. The first weird thing to happen was Team Elite losing a fight against NoChance. The winners of Game 1, got shut down in 11th place in the second game.

Several teams were happy with this because the lobby just became that much safer with their elimination. Nemesis and Team TG tried their hardest to survive in the final circle, but Last Breath captured the compound which was being favoured by the zone. They held onto their barn house and easily took both the teams as they were trying to make their way in. Great defense by Last Breath to put up their first win on the table.

In the third game on Kalahari, Sixth Sense finally exacted revenge against Team Elite for what they did to them in the first game

As always, Team Elite was just doing their thing. Taking names, shooting heads. This time they wiped out Team TG on their way into the circle. The circle formed around the cliffs of Refinery, which put Team Jawbreakers straight into the crosshairs of Team Elite. The circle also was decently favouring them. Sixth Sense also shared somewhat of their zone advantage, but they did not have as much elevation as much as Team Elite. Instead of waiting for Elite to make their move, Sixth Sense took matters into their own hands. They climbed up and secured two quick knocks while Elite was busy feeding on another team. With this, Sixth Sense won the game with a well-timed attack. They even wiped the rest of the stragglers and ended up getting more kills than Team Elite.

But that only enraged Team Elite more, as they unleashed their true powers in Bermuda

The fourth game was a good one for Team Elite and Extreme Ex. They both have been performing really well. They were very consistent too. By winning the fourth game, Team Elite proved that they must not be trifled with. Sixth Sense had just managed to touch the 100 point mark by the end of this game, whereas Team Elite was already miles ahead of them with more than 170 points in their kitty. 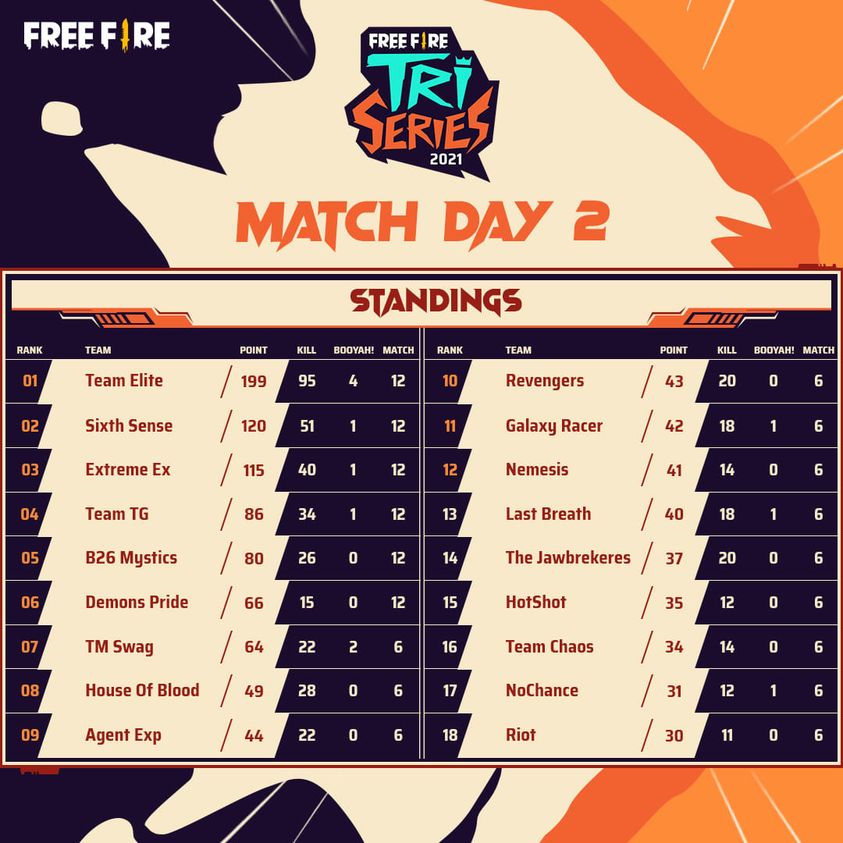 TG has their tryst with Purgatory awarded

Team TG made it to the top 3 in the first game of Purgatory but were unable to win against Last Breath that time. This time, B26 Mystics won an early fight against Last breath and chased them down to kill them.

The battle of titans - Agent EXP and Team Elite was a legendary brawl where Team Elite won but it was still impressive to look at.

Team TG on the other hand had the best positioning. They were at the center of the circle and they got kills by gatekeeping other teams, thus picking up 7 frags.

They had been struggling in the tournament so far, but in the last two games of the day, they showed us what kind of potential they had. The Kalahari game at the end of the day once again bamboozled a lot of people as it ended near cliffs. Team NoChance was on the low ground, but they played this one wisely. Team Elite, as always, had a good topographical and zonal advantage and they were on the course to win the game too. But NoChance never gave a line of sight to Team Elite. They stayed covered and played it patiently. They lured Team Elite downhill, and while they were vulnerable while jumping down, that’s when NoChance took them out. Their trap worked out. NoChance got the booyah with 7 kills.

To sum up the day, we can say that Team Elite continued their run of dominance, almost touching 200 points. Pahadi ending up with an insane 39 kills from 12 games is an insane statistic. The zones were merciless and the teams that rotated early had an inherent advantage this time. But despite that, some teams like Elite and Agents EXP believed that there isn’t any problem that cannot be solved by pouring petrol into the situation. Will they be able to keep up their form and continue dominating tomorrow as well? Tune in to Free Fire Tri-Series live stream on our Youtube to find out.

If you have missed the live-action for Day 2, check out the Frag highlights here.