The intercontinental battle has kicked off. The best teams of South Asia competed yesterday in the biggest tournament of the region. The first day of the Free Fire Tri-Series saw the best teams of India, Bangladesh, and Pakistan duke it out to get an early lead in the tournament. Teams of Groups A and B, locked horns today. Team Elite and Team Swag had the most impressive performances. Let’s explore what they did in detail.

TM Swag had a dazzling start

Swag had the best possible start that one could have asked for. They won two Booyah's back to back in Game 1 and 2. To start things off in Bermuda, they were able to find a way to rotate into the last zone without taking harm from any other team. While most of the teams were struggling to get any piece of real estate in the crowded city of Pochinok, Swag had their shelter sorted. Most teams ended up killing each other in a bid to get a building to hide inside or while moving into the tiny overpopulated circle. The ones that did survive were wiped clean by Swag and their explosives.

They carried the same momentum forward in the next game of Purgatory as well. This time even the zone gods favoured them as the final circle shifted in their favour. Team Elite also did a pretty good job in this game, getting a lot of kills and outscoring the winners. However, the zone moved in the favour of TM Swag and they were able to capitalize on the advantage that was bestowed upon them. They fended off the enemy teams that were trying to gatecrash their area. But they did not let that advantage slip and won the second consecutive booyah.

Bangladeshi teams dominated the first half of the day

TM Swag was not the only Bangladesi team that had a great start. The third booyah on Kalahari was conquered by Extreme Ex - one of the best performers of FFBC. Extreme Ex displayed the exemplary presence of mind. The game was chaotic and the zone was ruthless. It closed in the urban areas of the Bayfront. More than 8 teams were still alive in the last circle and all of them were desperately trying to avoid bullet and zone damage. In a confusing situation like that, team Extreme Ex resorted to creatively positioning themselves rather than fighting. They let two of their members start fighting, while the rest of them moved as close towards the zone as possible. They locked Pahadi from Team Elite outside the zone using gloo walls and let him choke to zone damage. That’s how they were able to steal the win away from them. 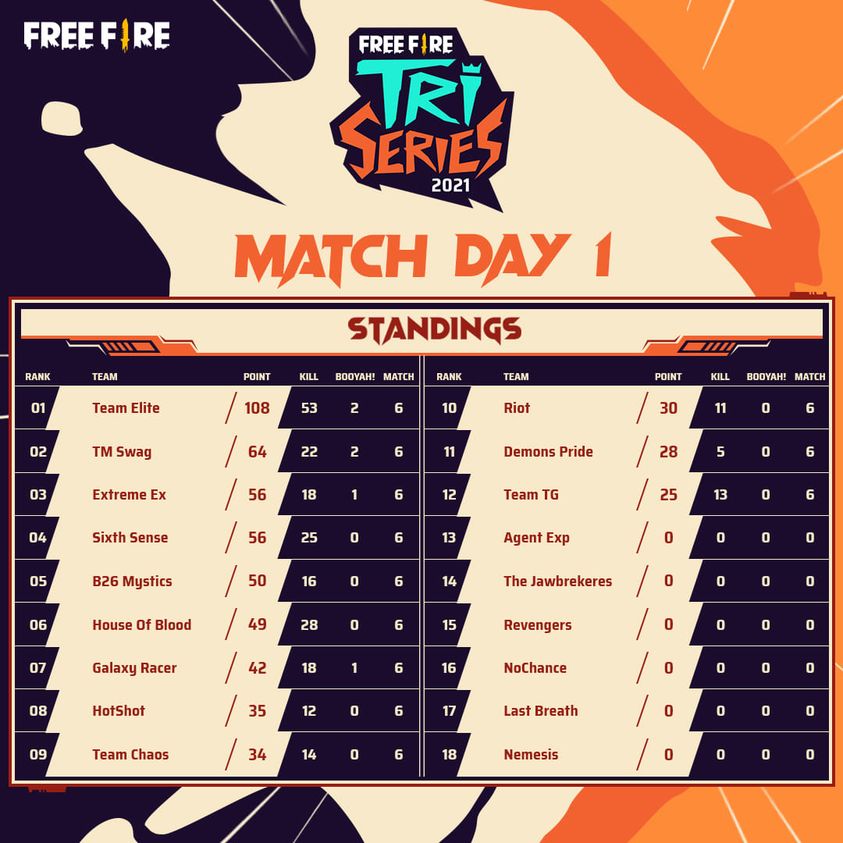 Team Elite may have lost that previous game against Extreme Ex, but they still had a high number of kills in the previous games, which puts them very high on the leaderboard even though they did not have a win.

They then proceed to win two games in a row back to back - In games 4 and 5 - On Bermuda and Purgatory. In both the games, they managed to out frag, outclass and outperform everyone on the server and destroy anyone who came too close to them. Pahadi went berserk with his sniper rifles. He got 23 kills and dished out 10385 damage on the very first day itself. This is enough proof that he is probably the most dangerous man in the tournament. Out of the top 5 players of the day, three players belonged to Team Elite. TE-Iconic and TE-Killer were also ranked second and third in the list, picking up 13 and 11 kills respectively.

In both the games, they not only controlled the end circles with perfection but also were aggressive right from the start - third partying whenever they got the chance. When they thought they needed to capture a compound because it offered a certain strategic advantage - they went for it and wiped the squad inside, no matter who it might be. This level of domination was enough to make everyone else fear them. Let’s see if they can keep it up tomorrow.

Galaxy Racer end the day with the last booyah

Team Elite would have accomplished a hattrick if it wasn’t for Galaxy Racer in the last game on Kalahari. Team Elite was one of the top 3 squads in the end and started attacking Galaxy Racer who were trapped in between the last two squads. But Galaxy Racer stepped up, with Vasiyo and Barcaboi getting important frags to clutch the game and win.

To sum it all up, Team Elite crossed the 100 point mark and has too big of a lead which can be hard to cover up for the other teams. TM Swag and Extreme Ex follow closely behind at the second and third spots respectively. Even though Galaxy Racer won a game, they are still only 7th on the leaderboard because of some lackluster performances during the start of the day.

Will Team Elite still stay on top today or will the others be able to mount a comeback on Day 2?

To find out, watch the stream live on our Free Fire Esports India Youtube channel at 2 PM IST.

If you have missed the live action for Day 1, check out the Frag highlights here.